Though it’s being posted late, this was October’s Pizza Lab.  Since October’s main event is Halloween and we were due for a dessert pizza, we decided to take our inspiration from Halloween candy.  We’re both huge fans of the chocolate/peanut butter combination so we tend to return to it frequently.  Butterfingers and Reese’s are both at the top of my list of favorite candies.  Since we’ve already done a Reese’s peanut butter cup inspired pizza, we turned instead to Butterfingers.  We decided pretty quickly that we wanted to use Butterfingers, but figuring out what else to put on the pizza took a bit more time.  Obviously chocolate and peanut butter would be involved somehow.  But just putting chocolate, peanut butter and chopped up Butterfingers on would be a bit too similar to the Reese’s pizza.  We had to get more creative. 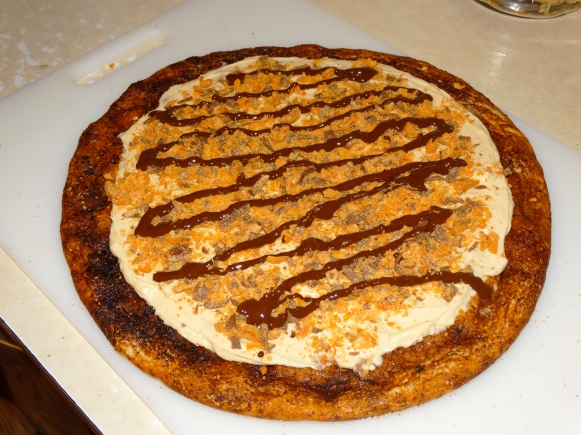 END_OF_DOCUMENT_TOKEN_TO_BE_REPLACED

So I’ve gone on a few tangents here and there, before on PCFG about peanut butter being godly, especially when paired with pretzels. Specifically, one of the greater marvels of the 21st century we’ve been treated to is the invention of peanut-butter-filled pretzels. Generally, they’re nugget shapes, with a small dab of peanut butter inside. They taste amazing, but unfortunately are somewhat of a luxury item as well, since most containers/bags will run you close to $5.00, which is a bit pricey for something you can easily devour over the course of three or four days. 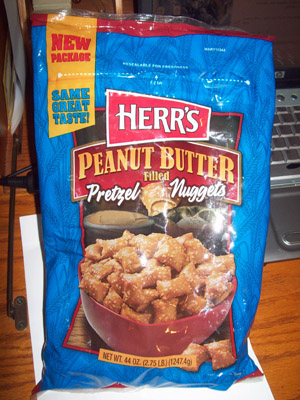 They’re pretty good, but for anyone out there who doesn’t like dropping five bucks on a single snack, there’s hope.

END_OF_DOCUMENT_TOKEN_TO_BE_REPLACED

Full disclosure: any smoothie recipe posted that features bananas is one of Erik’s creations.  I don’t like the flavor of bananas.  The only banana thing I like is my mom’s banana bread because it doesn’t taste all that much like bananas.  Anyway, back when Erik fought in martial arts shows, he devised his very own protein shake!  All in all, it will net you between 40-50g of protein, and on top of that has lots of other great nutrients for you to enjoy in your sweaty, post-workout clothes!  Besides that, this peanut butter shake can be made ‘just cuz’ if you’re in the mood for a nice yummy, peanut buttery treat, simply omit the raw eggs and wheat germ for something more dessert-like. 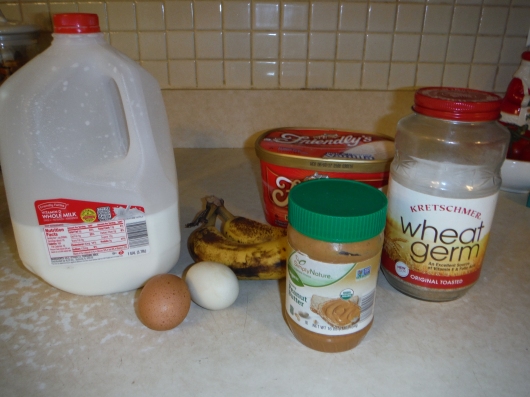 END_OF_DOCUMENT_TOKEN_TO_BE_REPLACED

“Test the Recipe” is a recurring column on PCFG where we test vintage (anything published before 1990) recipes and see if they stand the test of time or need updating. In this post we test the recipe as exactly as possible for the most accurate outcomes. Those recipes that need updating will be featured later in a “We Can Do It Better” post.

I’m mixing things up a little bit with this Test the Recipe post because I didn’t find it in a book; I found it in my grandma’s recipe box.  As such, I don’t know the actual date on it, but considering the recipe is my great-grandmother’s I think it’s fairly safe to assume that the recipe falls within the time frame I established.  I think a lot of the Christmas cookies my mom makes use my great-grandma’s recipes, but she doesn’t usually make peanut butter cookies, so I wanted to give these a try.  I really enjoy peanut butter, and cookies are great, so I was excited to have some peanut butter cookies to eat.  I’m sure my great-grandma didn’t come up with the recipe totally from scratch, but I don’t know where she may have gotten the original recipe from either. 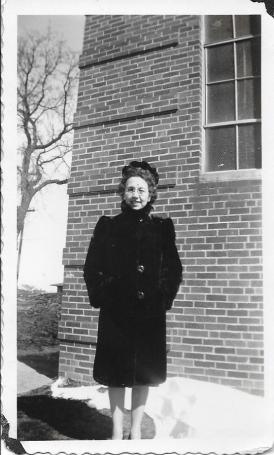 END_OF_DOCUMENT_TOKEN_TO_BE_REPLACED

I realize this smoothie is pretty similar to the peanut butter and jelly smoothie that I posted last year. But blueberry jelly is less popular than strawberry jelly, so I decided that it deserved its own post. The inspiration for this smoothie came from my putting blueberries on peanut butter toast. It’s very yummy, but it can be a bit tricky to eat. This smoothie has all the flavor without fear of blueberries rolling off of bread. 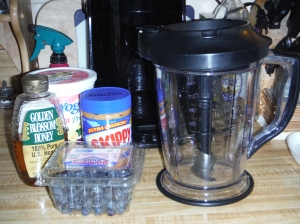 Most of what you’ll need.