We Can Do It Better – How to Make a Homemade Shamrock Shake!

It’s almost St. Patrick’s Day, and people are gearing up for the one day of the year they can get away with getting drunk at 10:00AM. However, for many others, the season of St. Paddy means something else (and I’m not just talking about non-stop listening to their Dropkick Murphys/Flogging Molly playlist). Of course, I’m referring to the almighty Shamrock Shake!

END_OF_DOCUMENT_TOKEN_TO_BE_REPLACED

Posted in We Can Do It Better

It’s now officially fall which means it’s seasonally appropriate to start eating pumpkin again!  It also means that Smoothie Sunday is coming to a close for the year.  But they’ll be back again next year!  But for now we’re winding down with a yummy fall themed smoothie.  I’ve made a couple of smoothies that use overnight oatmeal before, and that makes up the base of this smoothie as well.  It does require a bit of advanced planning (I myself actually almost forgot to get the oatmeal ready last night) but it’s worth it.  This smoothie is super creamy and really filling.  It’s a nice hearty smoothie to get you through those early fall mornings.

(Most of) What you’ll need.

END_OF_DOCUMENT_TOKEN_TO_BE_REPLACED

You hear a lot about antioxidants but you don’t hear very often what they actually are.  Antioxidants are molecules that prevent the oxidation of other molecules.  This is important because oxidation can produce free radicals, and too many free radicals can set off a chain reaction that may damage cells.  How good antioxidants are for you is in debate (as is almost every health related thing it seems) but keeping the oxidative state in your body balanced is important, if nothing else.  The body likes homeostasis.  I decided to call this smoothie the Antioxidant Power Smoothie because blueberries, pomegranates and cocoa are all fairly high in antioxidants.  Surprisingly this was my first time adding chocolate to a smoothie, probably because I generally don’t like having chocolate for breakfast.  But this smoothie turned out really yummy and wasn’t overpoweringly chocolate-y.  Scientists can argue about how good this smoothie may or may not be for you, but your taste buds will all agree that it’s delicious! 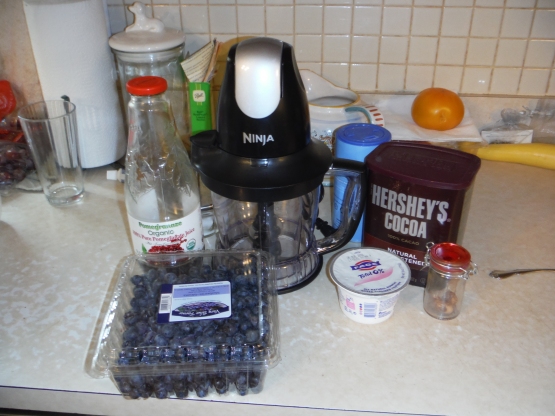 END_OF_DOCUMENT_TOKEN_TO_BE_REPLACED

If any of you out there have ever had taro bubble tea, you know how magically yummy taro can be.  Ever since having taro bubble tea I’ve wanted to make a taro smoothie, but had trouble finding taro I could use.  Near the end of last year’s Smoothie Sunday one of our local Asian markets started supplying taro, and ever since I’ve wanted to try it in a smoothie!  I decided to add blueberry not just for color but because we ended up with a surplus of blueberries from vacationing family’s farm share.  The blueberry and taro went together really well.  And now I really want to experiment with more taro dishes.

END_OF_DOCUMENT_TOKEN_TO_BE_REPLACED

This week’s Smoothie Sunday is a first because it’s main ingredient is actually kind of a weed.  Wineberries are an Asian species of raspberry that after being introduced to North America for ornamentation escaped from cultivation and now just grows in the wild.  They can be a bit annoying if they take over your garden, but overall we’re fans of wineberries here at PCFG.  They’re smaller and sweeter than raspberries and also free.  Obviously when eating fruit found out in the wild you want to be careful that you’re not eating something poisonous, but they have no poisonous look-alikes in North America, so if you find something that looks like a little raspberry growing it’s probably a wineberry and safe to eat.

This smoothie almost didn’t get made this year due to a drought affecting the wineberry output in my neighborhood, and then also a power outage the morning I was planning on making it.  But luckily things came together and I was able to make it.  It’s really yummy, so if you have wineberries growing by you, I highly recommend working them into your smoothie repertoire. 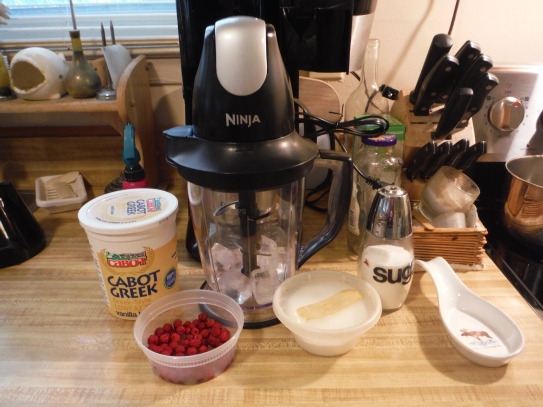