About a decade ago General Mills put out perhaps one of the most random cereals of all time, Cap’n Crunch Choco Donuts. It was comprised of a bunch of small, doughnut-shaped chocolate cereal pieces meant to resemble, um, donuts. It was aired as part of their “Oops” line, with the cereal mythos being that once in a while the Cap’n Crunch factory just screws up and puts out a brand new cereal by accident, such as the “Oops All Berries” cereal. At least the idea that they accidentally made a cereal all crunch berries made sense since they already existed, but the idea that their factory somehow randomly started making chocolate donuts instead of sweet cornmeal pillow things and fruity puffs was a little far-fetched even for dumb kid cereal marketing. Either way, from what I remember the cereal was kinda generic, not awful but not great. It was standard chocolate cereal.

However, apparently they decided to give it a sequel cereal ten years later, in an almost equally random fashion: 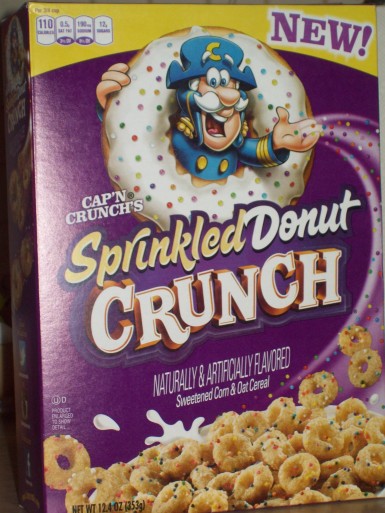 The obvious difference with Cap’n Crunch’s Sprinkled Donut Crunch is that this one isn’t chocolate. That would make one think (myself included) it’s kind of a dumb idea since it’s just Cap’n Crunch in the shape of donuts. Admittedly I only bought it since it was new, but I will say I was pleasantly surprised; it does have a right existing, for one good reason, its taste.

At first glance this seems like the regular, run of the mill Cap’n Crunch recipe, but interestingly enough it tastes a lot different than standard Crunch. Rather, Sprinkle Donut Crunch features a unique cake-batter flavor. As far as I can remember, I don’t think there’s been many cake themed cereals as long as I’ve been alive. The one that comes to mind was a short lived cupcake-themed Fruity Pebbles variety which was overly sweet and kind of disgusting. Fortunately, Sprinkle Donut Crunch tastes much better and while still predictably sweet, it isn’t as over the top. It’s pretty strong too, within one or two bites of first eating it I immediately thought “Holy shit, this is cake-batter flavored!” It’s kiiinda strange considering the box doesn’t mention anything about cake flavor, and that they’re shaped like little donuts, but to be fair donuts are pretty close to just being fried cake batter.

It holds up really well in the milk, taking a while to get soggy, a strong pro for all cereals in the Cap’n Crunch family. The sprinkles are a nice touch as well, and give it some extra whimsy. As mentioned in other Cereal Reports, I do like when cereals are shaped like miniature versions of stuff, such as with churros and toast. It’s gimmicky and fun and just plain adorable sometimes. Additionally the sprinkles leftover make the cereal milk fun to look at afterwards: 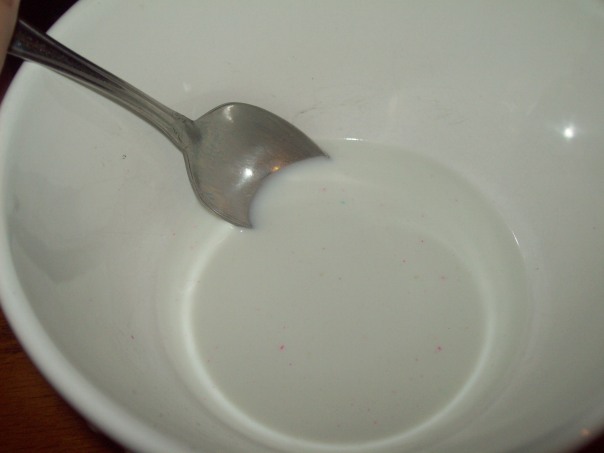 The only real downside with Sprinkle Donut Crunch unfortunately is that this is by far an absolutely don’t-give-a-shit sugar apocalypse kid cereal. It’s incredibly sweet, has a pretty substantial amount of sugars, and contains a bunch of artificial colors and flavors, meaning it’s particularly not good for you. This is the kinda cereal you eat when you’re seven years old and don’t even have a remote concept that some foods can actually be unhealthy to eat. Does that make it bad? I mean, not necessarily… it’s kind of bad for you, but not suspect enough to that point I’d say don’t buy it. Just, if you do buy it, consider it a treat. Basically dessert. This isn’t a nutritious, healthy start to the day. This is a “I’m sorta hungry and need some empty calories to round out the day.” kind of cereal.

(But eat it sparingly!)