Tortilla chips are a party snack classic.  They’re strong enough to hold up dips of pretty much any kind, but mild enough in flavor to let said dip shine.  And yet they also have enough of their own flavor to be yummy eaten on their own.  Tortilla chips bought at the store are usually pretty good (though some are better than others.  Perhaps we’ll have a snack report comparison about it one of these days), but tortilla chips at Mexican restaurants are usually even better.  That’s because most places make their chips fresh from scratch.  And is the case with almost all food stuffs, fresher is better.

Making tortilla chips from super scratch involves making tortillas from scratch.  While probably awesome, making fresh tortillas is a bit too much work for this particular application.  That’s why this is a cheat code; it’s halfway between totally from scratch and straight up store bought. 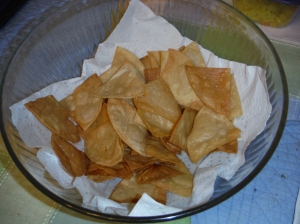 Here’s what you need to make your own tortilla chips:

Those three things, and a pan in which to fry is all you need!  While supermarkets are generally dominated by flour tortillas, most have at least one or two brands of corn tortillas too; you may just need to search a bit harder.

The amount you use it totally up to you.  Just keep in mind each tortilla is going to be cut into quarters, so one tortilla equals four chips.

Once you have your stack of tortillas, cut them into quarters (as previously mentioned).  You could also cut them into strips if you want, but that will take a bit more time, and also not result in the traditional triangle shape. 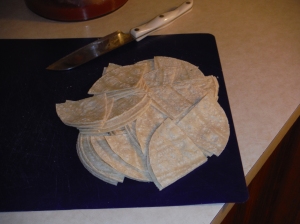 Heat about an inch and half of oil (standard frying oils apply: canola, vegetable, corn, peanut, etc.) in a large pan to 350 degrees Fahrenheit, or until a piece of the tortilla sizzles and bubbles in the oil.  It’s really important that your oil it hot enough before you start frying, or your chip will come out really greasy.

Working in batches so as not to crowd the pan, fry your tortilla wedges until brown, flipping halfway through.  It should take about a minute per side.  If it’s taking longer than that your oil is probably not hot enough.  If they’re browning a lot faster than that it’s too hot. 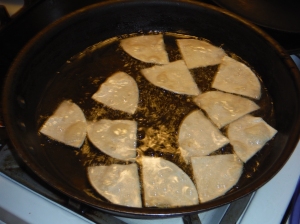 Once lightly browned, remove the chips from the oil using a slotted spoon and drain on paper towels.  You’ll probably still have to blot off some extra oil, especially in places where bubbles have formed.  Just be careful not to crack your chips.

Once free of excess oil, lightly salt the chips.  Then once they’re cool enough to handle, all that’s left is to eat and enjoy! 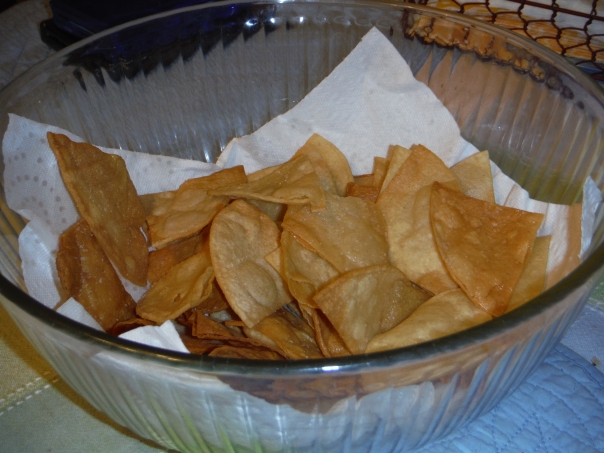 We usually just eat them plain because they’re so good.  But topping them with some homemade pico de gallo would be nice too.

You can even make them blue if you find blue corn tortillas! 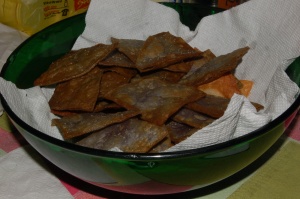 Posted on June 23, 2015, in Cheat Codes and tagged awesome, chips, Delicious, gluten-free, knowledge is power, On the cheap, snacks. Bookmark the permalink. 2 Comments.