So by now I’m sure everyone and their mom has heard that General Mills brought back the much-beloved French Toast Crunch about two years ago, and I’m happy about it for the most part. (Though honestly, the cereal tends to be a little bit pricey, so sadly I haven’t been eating it as much as I’d like to.) In the last year, the big GM released two new cereals in a brand new subline known as Tiny Toast, in what I assume is mostly an effort to justify keeping manufacturing French Toast Crunch, since the machine that produces tiny little toast-shaped cereals now has more than one specific purpose. Similar to French Toast Crunch, these are tiny little toast cereal pieces with sugar and fruit specks. So far they’ve got both strawberry and blueberry, and we managed to pick up a box relatively cheap recently at a local liquidation store. 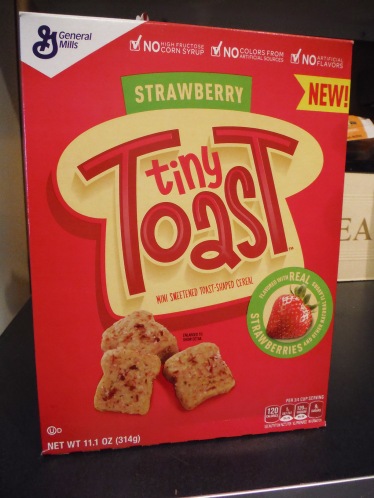 Interestingly enough, Tiny Toast (which I might add is frigging ADORABLE) seems to be skewing towards a slightly more health-conscious audience, opting for pretty decent ingredients as far as sweet cereals go. No dyes or artificial stuff for the most part, and being flavored with just plain ol’ regular sugar and real-ass strawberries. Obviously, the fact it contains any sugar at all is still enough to send the sugar-crusaders into a frenzy, but in fairness they probably don’t have room in their miserable, hyper-adult existences. Either way, it’s nice to see a mainstream company releasing new cereals that contain more wholesome ingredients in general. And again, come on, look at these things: 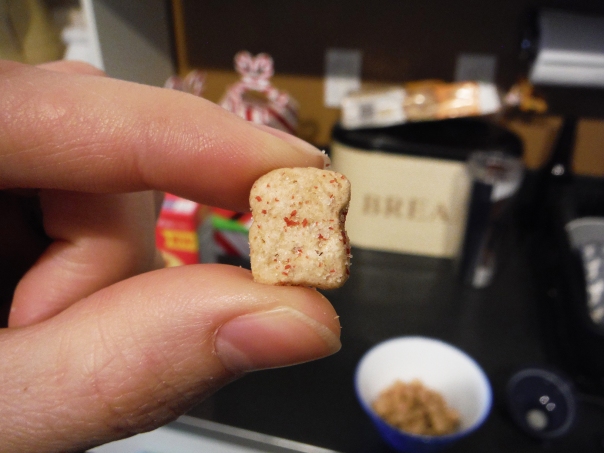 In terms of flavor, you can definitely tell they’re using real strawberry to flavor them, since it carries a little bit of tartness too. The closest thing I can describe it as is those strawberry-shortcake ice cream bars made by Good Humor and other brands. Overall, they’re not even terribly sweet. The berry flavor is satisfying and prominent, but they still do have enough sweetness to taste good. 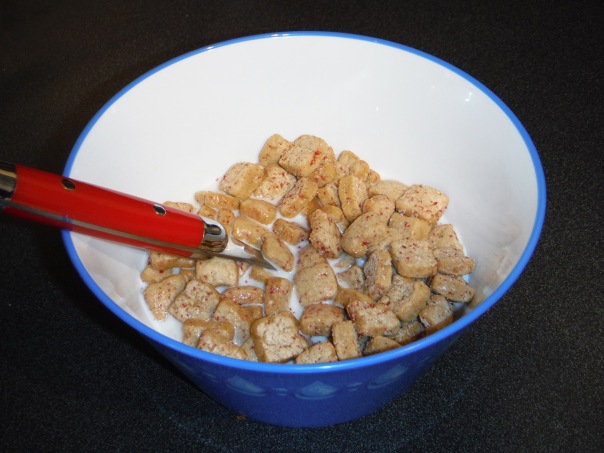 The only real downside to Tiny Toast is that the texture is a tiny bit iffy. They’re nowhere near as crunchy as French Toast Crunch (which in fairness is named French Toast Crunch) as I was expecting, and are more in line with the softness of Cheerios. Fortunately, because they don’t start off very crisp, they also don’t get soggy too quickly either. That’s useful too since Tiny Toast does produce some top-notch cereal-milk. If you’re hankering for Strawberry Quik, this stuff makes for a pretty good substitute. 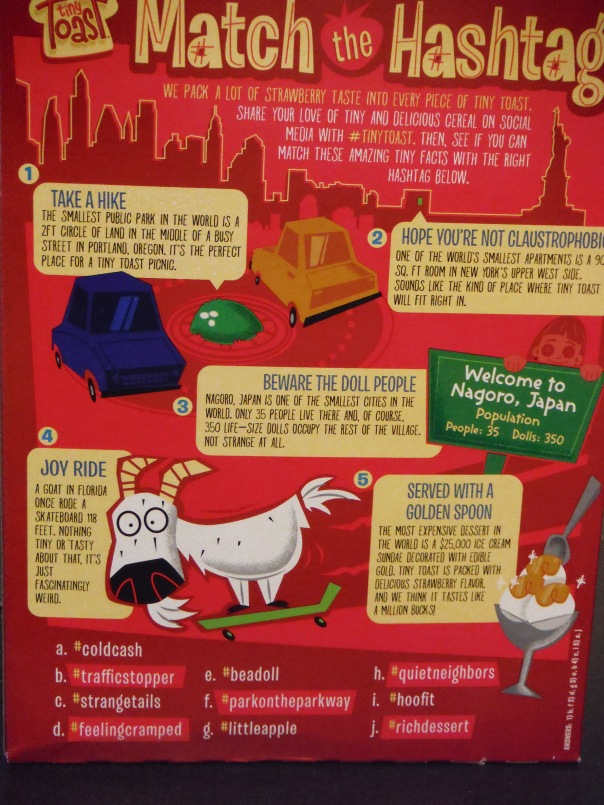 Can we just stop for a minute and marvel at this bizarre trivia game on the back of the box? Not only is the premise to just match up hashtags to fun facts (a really strange occurrence that I never saw coming), but I love how quickly they gave up on the “tiny stuff” theme in the fun facts. Number one is about a small-sized park, number two is about a tiny apartment, and the third is about a small Japanese town filled with dolls. Alright, those check out. Then number four just makes an absolute beeline and informs you about a goat riding a skateboard in Florida, and the final one is about an ice cream sundae that costs $25,000. I think I got whiplash from the segue in that last one honestly… “Here’s a factoid about ice cream with gold on top! …This cereal has nothing to do with that, but it tastes great!” The most beautiful part about these is that #4 explicitly admits how random the goat fact is, without trying to even tangentially tying them together. It just all feels like an intern at General Mills spend 8 minutes designing the box after quickly Googling “Fun Facts About Small Things” and then giving up halfway through. But I digress…

Joking aside, Tiny Toast is actually a great cereal. It tastes good, makes good milk, looks fun, and is all around just a nifty concept. It’s been out for about a year now, so as we were able to, you can probably find it at discount markets and other places you can get cheap cereal. Because despite me calling it a “great” cereal, it’s not “$4.50 great”. No cereal is “$4.50 great”.

Should you eat Strawberry Tiny Toast?

Posted on May 28, 2018, in The Snack Report and tagged breakfast, cereal, pleasant surprises, strawberries, wtf, yummy. Bookmark the permalink. 1 Comment.