Thanksgiving has come and gone once again. And in kitchens all over America, people are trying their damnedest to salvage their leftovers, reconstituting it back into a nice emulation of the delightful feast that took place four days ago. Or perhaps you couldn’t wait that long? Perhaps you figured that Friday is a lazy enough night to eat leftovers for dinner. That’s a possibility as well.

But no, there is a better destiny for your Thanksgiving leftovers… there is a greater cause they can be called to… one special dish that comes round but once a year, just like the aforementioned feast that inspired it. Longtime fans of PCFG may know what I speak of. Of course, that is Thanksgiving Pizza.

Now now, obviously we’ve covered Thanksgiving leftovers being Frankensteined into a pizza before. That was almost two years ago. Last year we also created Pumpkin Pie Pizza, using what remained of your pumpkin puree. This year we returned to the main attraction however and sought to be creative. We tried our hardest to go through different Thanksgiving dishes than we used on the original pizza; namely we originally used turkey, cranberry sauce, and stuffing. Aside from requisite turkey, we used all new ingredients. 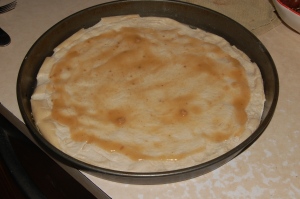 As per usual we gave the crush its baking soda bath to promote browning. Turkey and gravy were laid down on the crust as the base layer. Gravy makes for a great sauce, as well as a means to prevent the turkey from drying up in the intense heat of pizza baking.

When it comes to Thanksgiving meals, your main side dish is always gonna be stuffing. Everyone on the planet loves stuffing. As Cracked.com so lovingly describes it, “A delicious mix of bread, vegetables and herbs, crammed up the hollowed out asshole of a large dead bird.” We really wish we could’ve used stuffing again. It’s just so perfect. But alas, this was a new pizza, and thus we needed a new side-dish. Fortunately there’s another starch-based hero that captures your gravy and soaks up flavors: mashed potatoes. We added a few dollops of mashed potatoes to the pie, rather than an entire layer of it since that would’ve ended up either incredibly messy, or at very least just weight the pizza down with a layer of pure starch. 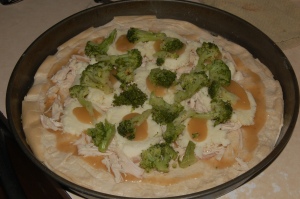 One longtime favorite for getting some greens into your feast is the old standby of broccoli casserole. Admittedly I’m not a fan of casseroles. I’ll put that right out there now. But beyond my own tastes, it was agreed that loading casserole all over the crust would just end up being too much food for one pizza. The potatoes were already sitting pretty heavy, so a layer of casserole would be disgusting overkill. Instead, we opted for the simpler option and included regular broccoli in its place. By doing so you get the basic flavor of broccoli casserole, but in a much more manageable form. 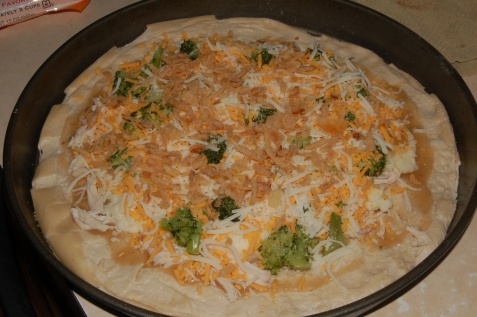 The final toppings of this pizza were pretty easy to decipher compared to the rest. To help the broccoli in its job of repping broccoli casserole, we made the majority of our cheese layer cheddar, with a little bit of mozzarella to add diversity. The pièce de résistance here, however, was sprinkling crispy, french-fried onions on top. Yeah, those crunchy little onion things that get added on top of greenbeans? Who needs greenbeans when more or less anyone eating them would probably rather just indulge on a can of that french-fried oniony goodness instead. We added those as a final garnish, on top of the cheese to prevent them from getting soggy.

Interestingly enough this pizza didn’t quite capture the pure, absolute flavor of a Thanksgiving dish the same way that the original pizza did, but that’s not to say it was bad. No, not by a longshot. This pie was great. All the flavors came together wonderfully, which makes sense since they’re designed to be eaten together in non-pizza form. I believe the one main drawback which held this experiment back was the fact that the turkey and the gravy sort of got lost in the mix of food. The potatoes and broccoli comprised most of the flavor, but again that’s not bad. It was more of a, uh, alternative Thanksgiving flavor. If you have all the necessary ingredients lying around, then it’s absolutely a worthy use of your leftovers. 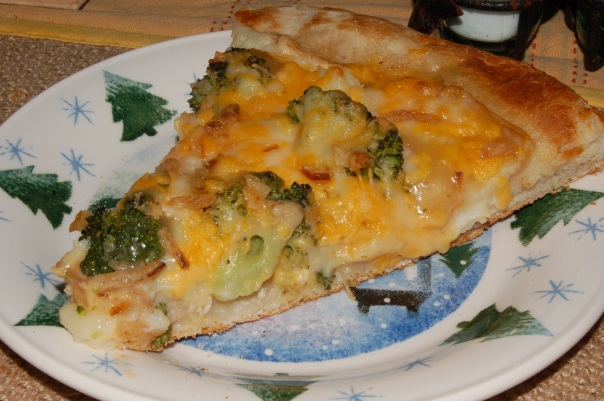