We Can Do It Better: Taco Bell Quesarito Recipe

Another few months, another new Taco Bell featured item… son of a bitch. Anyone who’s read our past WCDIB posts knows I used to be a raging Taco Bell junkie, but stopped eating it years ago when I switched to a healthier diet. Whereas I’d jump in my car and race to the nearest Taco Bell upon seeing an ad for something new, now I simply bow my head and shed a single tear. Fortunately though, since starting Poor Couples Food Guide, Meg and I have started recreating popular franchise foods as a hobby of sorts. Not only does it make it easier to bear the temptation, but making your own versions at home is rewarding since you can actually improve upon the source material.

That brings me to Taco Bell’s newest item. Want to know how to make your own Quesarito at home? 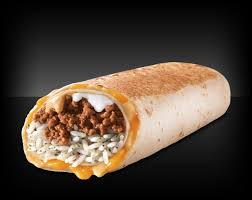 So it’s a burrito wrapped in a quesadilla. Simple enough right? The funny thing is despite its simplicity, I imagine people buying it would be taken aback, thinking “What witchcraft is this?!” Part of the mystique really lies in the fact that a lot of people don’t realize how easy it is to make quesadillas. They’re essentially just a grilled cheese sandwich made with a tortilla. If you own a griddle, you possess the means to make them. No need for a fancy, stupid quesadilla press or other contraptions you can throw money at in home goods stores. It’s a tortilla heated up with cheese, folded in half, not rocket science. Thus the process of turning it into a burrito isn’t really much more difficult either.

Really, all you’re doing is making two burritos at once here. Surprisingly the cheese layer in the quesadilla outside is pretty noticeable and turns out really good. Everyone loves cheese, especially melty cheese, so it makes sense that that one added step makes such a big difference. One added benefit to making these at home? These things are huge when you use a 6″ and 8″ burrito. One was good enough for a whole meal, when we made them. On top of that, they heat up great after being refrigerated or frozen, and then being microwaved. So make five or so, save a bunch, and heat them up as you go along. NO need to go to Taco Bell! Afterall, theirs are smaller and made with old ingredients. Also their meat is probably radioactive.

Want to try your hand at making another Taco Bell mashup? Check out our post on how to make your own quesalupa! (Taco Bell hasn’t even released that item to the general public yet!)

Posted on July 4, 2014, in We Can Do It Better and tagged cheese, chicken, Delicious, forbidden fruit, guacamole, pleasant surprises, recipes, tacos and burritos. Bookmark the permalink. 6 Comments.