We Can Do It Better: How To Make a Quesalupa

So Taco Bell has a history of cutting and pasting menu items together to make new ones, like the quesarito. We already taught you how to make one, and now we’re all eating burritos and quesadillas and everything at home. Hooray, no need for anyone to go to Taco Bell ever again!

But then, they had to go ahead and invent this: 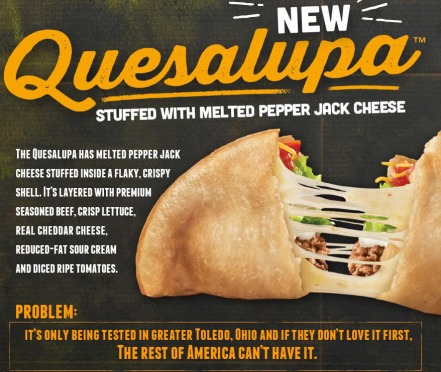 Naturally, the side of me that still wishes I ate Taco Bell felt a bullet go through its heart. I’ve seen some yummy looking menu items go up there since I stopped eating fast food years ago, but nothing really spectacular. But I didn’t let it get me down. No. Instead I decided we here at PCFG were gonna beat them at their own game. Quesadilla-chalupa hybrid? Alright. I like a challenge. Only available as a test item in Ohio for now? Bam. That was your big mistake, because it gave me the time to experiment, and now we’ve already solved the mystery of how to make one. Checkmate, bitches.

If you’re wondering if it’s really possible to make a homemade quesalupa, I’ll tell you right now, yes. It is. It’s not as easy as some of the other burrito/taco foodstuffs you can make at home, but it can be done, it’s still pretty inexpensive, and is incredibly indulgent (read: yummy). While at first it seemed a little confounding for how I could possibly make this, and I assumed they used some sort of top secret technique to prepare the chalupa shells, I eventually realized it’s actually pretty obvious what they used: pocket pitas. 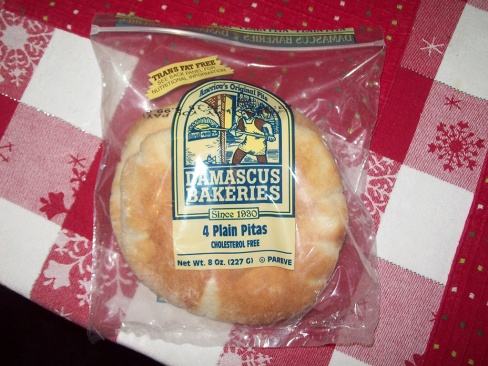 If you’ve never seen one before, pocket pitas are flatbreads that are baked a certain way so that they’re actually kind of hollow inside. Mysteriously, they’re becoming harder to find than plain old regular flatbread pitas like you would make a gyro out of. Not even our local Turkish market stocked them. But! Fear not, they’re not impossible to find. Rather, you can find them pretty easily if you look around the deli section of most supermarkets. We live on Long Island in New York, and were able to find them pretty easily at Path-Mark, Waldbaums, and other grocery stores. Just make sure they do not say “pocketless” on them. And even then be careful since many pita flatbreads without pockets won’t mention being pocketless. Despite that, the pocket ones are easy enough to identify since they’re poofy and tan-colored, compared to the dense white gyro style ones.

Really the hardest part of all this is the frying. I didn’t stress enough before, but this thing is going to fry REALLY fast. Like, when we were performing our experimentation, I placed the pita in the oil, walked away to go pour myself a glass of water and by the time I got back it had burnt. The annoyance of hovering over a pan of hot oil is well worth the joy making your own quesalupa shell at home. The cool part about the quesalupa itself is that the cheese retains a lot of the moisture that might’ve been lost through cooking at high temperatures. Chalupa shells tend to be on the crunchy side, but this is more of a chewy texture thanks to that layer of delicious cheese.

So hear that Taco Bell? Anything you can do, we can all do at home. Until the day comes where you find a way to fit an entire plate of nachos inside of a burrito or create gordita that cures cancer, I got your number. Maybe you should change that ad campaign for the quesalupa from “The rest of America can’t have it” to “The rest of America can’t have it unless they spend $3 on pitas and cheese.” I encourage everyone out there to try your hand at making your own homemade versions of your favorite chain foods. It’s healthier and cheaper in the long run! Now get out there and make some damn quesalupas.

Can’t stop thinking about Taco Bell creations? Check out our recipe for the Quesarito! If you can’t buy ’em anymore, just make it at home!

Posted on March 11, 2015, in We Can Do It Better and tagged cheese, Delicious, forbidden fruit, recipes, tacos and burritos. Bookmark the permalink. 3 Comments.