“In epistemology, the prefix meta- is used to mean about (its own category).”

Meta is a bit of a buzzword lately, due to it being a fun prefix, and uber-intellectual way to describe things. For example a movie about making movies is meta. Playing a video game inside of a video game is meta. A dream in a dream in a dream movie about dreams is wayyy meta.  Well, Meg and I made a meta pizza. That’s right, Pizza Lab is all about uniquity and experimenting with the combination of pizza with other foods. This time around, we combined pizza with another, more venerable food combination, macaroni and cheese. So it was a food combination of food combinations.

Erik S. Ya know, for some reason I can’t stop craving mac ‘n’ cheese lately. I guess this pizza is partially to blame…
Meg A. We did have a very mac’n’cheese filled week, between mac and cheese bites over the weekend, and then this pizza during the week.
Erik S. Hopefully it’ll pass over soon. That being said, this pizza was preeetty fantastic.
Meg A. It was really yummy. And it was our first Pizza Lab/We Can Do It Better crossover.
Erik S. That is technically true. The findings of this experiment will lead to our next WCDIB focusing on macaroni and cheese.
Meg A. As soon as we tasted the mac and cheese we had a good feeling about this pizza. Luckily it reached our expectations, unlike some other pizzas *cough*discofriesandchinesefood*cough*
Erik S. Yeah, I feel as though the pizza benefited a lot from the fact that this mac ‘n’ cheese recipe was incredible on its own.
Meg A. I’m glad we decided to make our own from scratch instead of just using a box mix (yes, yes, we do use box mixes on occasion, hold back your shock).
Erik S. Yeah, we used a recipe courtesy of our food scientist role model, Alton Brown.
Meg A. We should really hang a picture of him in our kitchen or something.

As mentioned in the past, the two of us really enjoy macaroni and cheese, especially in the form of mac ‘n’ cheese bites. The idea to bring it into Pizza Lab took inspiration from other pasta pizzas like baked ziti and lasagna slices. While the idea of starch on top of starch seems a bit, well, starchy, it seems to work since both of those pizzas feature copious amounts of cheese and sauce from the pasta going on top. They do tend to be a bit heavy for the most part, but if you mentally prepare yourself for the ensuing food coma, it should be manageable.

Erik S. From the get-go we knew this was gonna be a pretty simple pizza. Macaroni and cheese on pizza crust. Our only obstacle was what to use as a sauce for the crust.
Meg A. Yes. We knew it needed something to help keep the pizza from being too heavy and weighed down with starch.
Erik S. Plus we wanted some sort of flavor variation. The mac ‘n’ cheese was really awesome, but the pizza needed to be more than simple pasta and cheese sauce on bread.
Meg A. Exactly. We tossed a few ideas around and eventually decided on the hot sauce that was in the mac and cheese itself.
Erik S. Yeah, we figured it already would pair well since it was already in the sauce, so on its own sitting on the crust would let it give a secondary flavor without sticking out too much.
Meg A. As someone who is kind of a wimp when it comes to spicyness, I was a little worried about dumping hot sauce on the pizza (despite acknowledging it needed a kick). But it managed to work out really, really well.
Erik S. We put just a super thin layer of the sauce, and it absorbed into the dough and stood out enough to counter the heaviness of the mac and cheese, but not overpower any of the other flavors.

As mentioned in block quote, we were unsure of what to use for a base sauce. Obviously, a cheese sauce would seem logical, since it’s macaroni and cheese, right? Wrong! With the mac ‘n’ cheese already featuring mass quantities of cheesy sauce in it, there wouldn’t really be much merit in putting it on the crust as well. It seemed like a better choice would be something sharp, something which would stick out from the mass of pasta and cheese getting spread on. In the end, we narrowed it down to two choices: hot sauce or hoisin sauce. We all know and love hot sauce, akin to brands like Tabasco and Frank’s, however hoisin is a bit more esoteric, basically being a sort of spicy, Asian barbecue sauce. We tried each one with the mac ‘n’ cheese to see how it would blend, and the winner ended up being hot sauce. Incidentally, the mac ‘n’ cheese recipe called for a bit of hot sauce mixed into it, so it seemed natural it would work well together. 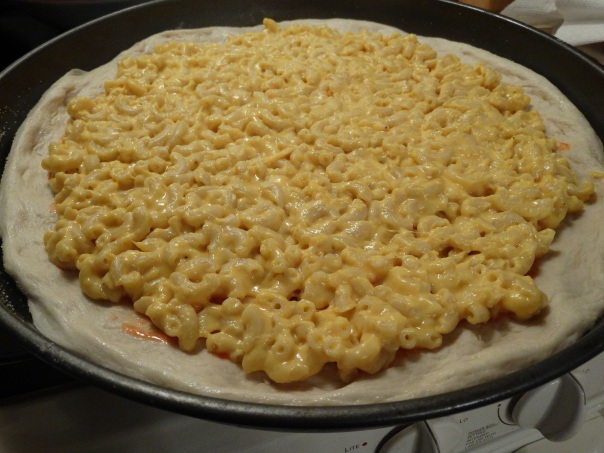 Erik S. We also threw some chopped bacon on top of the mac ‘n’ cheese since some recipes already call for it in the first place.
I think this was our most effective use of bacon on a pizza yet.
Meg A. It worked since we weren’t particularly relying on it, it was more of a bonus here.
Erik S. The only other part to cover was the cheese. Which sounds silly when talking about mac ‘n’ cheese, but we still felt the need to throw a protective cheese layer on top.
Meg A. Plus, you can never have too much cheese!
Erik S. That too. Plus the phrase “protective cheese layer” sounds fun.
Meg A. It does. It makes me think of a cheese raincoat or something.
Erik S. I was thinking other things, but a cheese coat works too. But yeah we used generic pizza blend, which is made up of mozzarella, cheddar, and provolone.
Meg A. It kept the mac ‘n’ cheese from drying out too much on top, which was all we really needed it to do.
Erik S. Yep!

We added bacon as well to help differentiate the flavors and further add variety in the pizza. The mac ‘n’ cheese was fantastic on its own, but we wanted it to still be a pizza with multiple flavors in each bite. Bacon is a welcome addition in many mac ‘n’ cheese recipes, and we’ve been looking for a pizza to help redeem it in, since it worked against us in both the Disco Fries Pizza and the Limburger Pizza. On top of this, (no pun intended) we added a simple shredded cheese blend on top for two reasons. Firstly, the mac ‘n’ cheese had a good chance of drying out in the hot oven since it’s already cooked; secondly it’s a pizza, and a molten cheese layer on top is aesthetically important.

Fortunately, everything worked out as planned. The hot sauce cooked into the crust a bit, and provided a definite counter-flavor against the smooth, creamy cheese sauce. Fortunately the crust also helped mellow out the spiciness of the hot sauce as well. Additionally, the bacon fulfilled its role as a small accent amongst the rest of the pie. And lastly, the top layer of cheese, while thin, did protect the mac ‘n’ cheese from drying out. So all in all, the pizza was an overwhelming success. It tasted great too, though in fairness it was pretty much destined to taste good from the start, on account of the mac ‘n’ cheese being delicious on its own.

Meg A. This pizza was physically heavy, and very filling, but in the best way possible.
Erik S. Yeah for the first time you weren’t able to eat two slices!
Meg A. To be fair, we did finish off the leftover mac and cheese first while the pizza was cooking. If I’d had an empty stomach I’m sure I could have!
Erik S. Okay, I will give you that.
Meg A. This pizza is actually kind of tough to rank… On one hand it was one of the best-tasting ones we’ve made, but on the other hand, the mac ‘n’ cheese tasted amazing on its own, so it was gonna taste good by default.
Erik S. It’s also getting harder to rank our pizzas just because we’ve made so many now! And they’re all unique and have their own good qualities. It’s hard to pit them against each other.
Meg A. This is true. I guess that’s why we’ve simply settled on deciding in-person “mission success” or “mission failed” in person. And in this case, a big big mission success!
Erik S. Yes!
Meg A. Did we high five after eating this?
Erik S. We did!
Meg A. Nice!