It’s been a long, brutal Winter. Fortunately Spring is on its way soon! Probably! To be honest, who the frig knows at this point. The vernal equinox is a day away, and it’s still below freezing here in New York. I give up. No matter, as springtime tends to be a time when cereal companies begin releasing new products, or so I’ve noticed over the years. Both brand new cereals, and limited runs from the past year or so, find their way onto stores, which I imagine might be something to do with the fact that people probably tend to eat more hot cereals during winter months. Either way, it’s an exciting time of year for the budding cereal enthusiast or anyone with an inner child. It may be obnoxiously cold outside, but that didn’t stop me from locating some new cereals to review. Just the other day, Meg and I stumbled onto this exciting, little treasure: 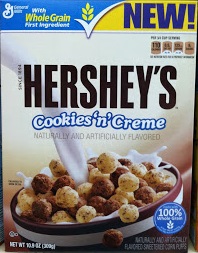 Sometime in the recent past, Hershey’s put out an Oreo wannabe chocolate bar made of white chocolate and cookie crunchies inside, aptly named the Cookies ‘n’ Creme bar. I’ve had it before, it’s pretty good. Over the years however, cocoa butter has risen in price and now the bar is made of imitation chocolate-like candy coating, and no longer labels itself as white chocolate. As such, it tastes a bit greasier and less smooth. For shame, Hershey. Nonetheless, this cereal is actually a brand new addition to that one-off line, if you can even call it a line. More or less it’s marketed as a cereal version of the candy bar, bearing the same name and similar packaging. The only difference is Hershey is producing it under General Mills.

The cereal itself is a puffed corn cereal, similar to Cap’n Crunch, however the pieces are individually smaller and less crunchy. While I don’t prescribe to the train of thought that Cap’n Crunch somehow cuts peoples’ mouths, as some claim, I will say that I prefer the consistency of Cookies ‘n’ Creme a lot better than Cap’n Crunch. They’re easy enough to chew, but refrain from turning to mushy garbage too quickly. It’s a good balance.

The flavor meanwhile has an interesting subtlety to it. It’s somewhat reminiscent of Cookie Crisp, but not as sharp and artificial.  As you can see, there’s chocolate and vanilla pieces equally, both with specs of chocolate flavor things on them. As such, the overwhelming flavor is chocolatey, but not to the unnecessary extent of cereals like Cocoa Puffs or Count Chocula. I always found that when cereals try too hard to taste like chocolate, they end up getting a weird coffee-like flavor to them. I think due to the division of white and brown puffs in this cereal, it prevents this from happening. That’s great! Additionally, the cereal itself isn’t even that sweet, instead focusing more on its cookies/creme flavor it’s trying to emulate.

As far as the main theme of the cereal, it works pretty well. The gimmick is that the chocolatey specks wash off into the milk, and at the end of it, you are left with a bowl of sorta ‘cookies and creme’. 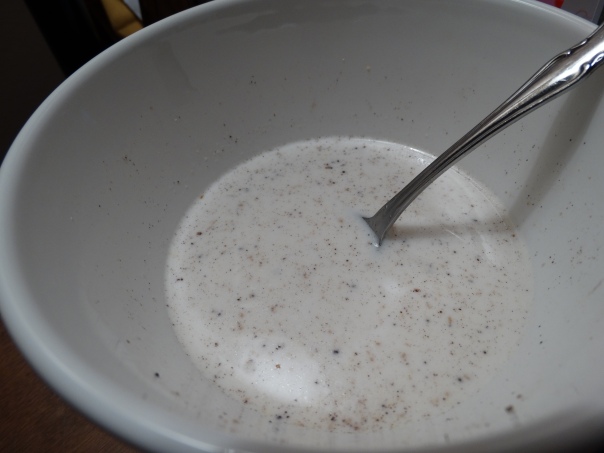 The cereal milk absorbs the vanilla/chocolate combo taste pretty well, and like the cereal itself isn’t unbearably sweet. It resembles an Oreo milkshake a bit. All of that makes for a pretty pleasant surprise, considering most people would expect a cookie-themed cereal to be the sweetest of sugar dumpster cereals meant solely for kids. Hershey’s Cookies ‘n’ Creme avoids this pretty well, and overall is a very pleasant cereal, despite not being the most extravagant or amazingly tasty.