Pico de gallo is funny just because its literal translation in English is “rooster’s beak.”  But rest assured, there’s no beak involved here.  There isn’t even any chicken involved.  Pico de gallo is actually a salad made primarily of tomatoes, onions and chilies, though other ingredients can be added as well.  Pretty much you can just think of it as a less liquid-y salsa.  This is our version of pico de gallo. 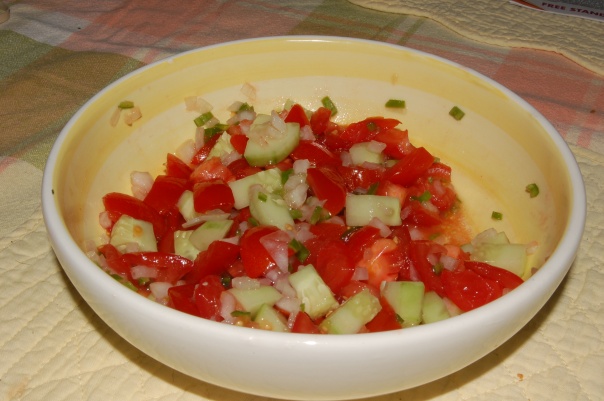 END_OF_DOCUMENT_TOKEN_TO_BE_REPLACED

I’m a big fan of Autumn, most of my friends know this. I recently went on about this in my pumpkin spice article. Despite this, September always was a bittersweet month, since Summer is still my favorite time of year no matter what. Halloween and pumpkins are nice, but IMO it’s not quite worth the loss of wearing nothing but t-shirts and driving with the windows down. So before the end of Summer, Meg and I wanted to do one last grilled pizza before temperatures dropped back into the 50s and 60s, making grilling your foods inappropriate and silly (unless of course you live in the south where it’s probably state-law to never go more than a month without igniting your barbecue). We grow lots of basil every summer, and thus make a lot of pesto each year. This combined with the fact that our last grilled pizza almost resembled a panino sandwich in texture made us realize we absolutely needed to make some sort of Tuscan pesto chicken panini inspired pizza. And while this was one of the more tame ideas for a Pizza Lab, it ended up being delicious to the point of borderline sexy.

Erik S. So this pizza was pretty okay I guess.
Meg A. Just okay?
Erik S. Sorry, that was a typo… So this pizza was OH MY GOD IT WAS SO OH MY GOD.
Meg A. Haha, that’s better. This pizza was indeed pretty magical. But we knew it was gonna be awesome from the beginning.
Erik S. Magical is a good way to describe it. Only pure magic could have produced such euphoria.
Meg A. Yeah, in our heads (and our noses) we had a pretty good inkling it was gonna be a sheer delight. It’s also probably the most decadent pizza we’ve made yet
Erik S. It’s interesting too considering it’s one of the least outlandish ones we’ve made too.
Meg A. True. It’s the most traditional-ish.
Erik S. Hm. Looking back at the photos is taking me back. Oh man… We need to relive that pizza some day. I’m feeling feelings.
Meg A. Do you need a minute? Don’t forget to lock your door…

END_OF_DOCUMENT_TOKEN_TO_BE_REPLACED

So it’s looking like Pizza Lab managed to snag a second edition after all. Considering the effort that went into the original, we weren’t sure if we’d be up to a second one. Nonetheless, the first one received a decent number of views, which goes to show you apparently if you post something pizza-related on the internet, it will receive attention. That, and also come on, it’s friggin pizza. We couldn’t let ourselves be too lazy to make pizza together! Oh but where was I, this edition we made a pizza based on the idea of gyros.

Gyros are a delicious, albeit misnomered, staple of Greek-American cuisine. Meats and vegetables served in a pita wrap and slathered in one of the most ironically delicious sauces on the planet, considering tzatziki’s appearance. Authentic gyro in Greece doesn’t necessarily need to be served in a wrap, since it actually refers to the style of broiling an enormous block of meat on a long, narrow tube-like cooker called a spit (cue penis jokes). The meat, usually lamb or chicken, is shaved off into slices, and basically tastes like something that should gross you out but is somehow delightful. In America, where the gyro pita has become synonymous with Greek restaurants and diners everywhere, we simply refer to anything involving a pita rolled up as a gyro. It’s not technically correct, but who the fuck cares, no one’s capable of arguing when they have a mouthful of sweet, sweet spit-meat (again, penis jokes). Souvlaki on the other hand refers to any meat seasoned with lemon and Greek spices, then skewered and grilled. But whatever, this is getting too in-depth and technical for something that appears side-by-side pictures of video games and half-nude anime girls. You all know what a gyro is.

Erik S. So we actually were talking about this idea for a while right?
Meg A. Yeah. I think the day you had that really crappy gyro the idea of a gyro pizza came up.
Erik S. Oh right, you mean the pile of onions which may or may not have contained traces of chicken and pita.
Meg A. Yes, that.
Erik S. Following this, we began craving gyros like a couple of manic, pregnant, Greek women, only without the excess body hair and fetus.
Meg A. Well… without the fetus at least, haha.
Erik S. Uh… yyyeah.