Ice cream is a staple summer dessert.  Technically you can eat ice cream year round, but summer is when it really shines.  They even send trucks out to practically deliver ice cream to your house!  While that familiar jingle is a welcome sound of summer, you have to admit, in the dark evenings of winter it’d sound kinda creepy.  You’re also much more likely to want to eat a freezing cold treat when it’s hot out than when it’s freezing outside too.  Since August is the last full month of summer we wanted to make this month’s pizza lab nice and summer-y.  It was also time for a dessert pizza.  So as you may infer from the previous sentences, summer + dessert = ice cream!

That’s right.  We made an ice cream pizza.  It seems impossible at first, since pizza is baked and ice cream is frozen.  But as I’m sure many of us are aware, cold/room temperature pizza is a delicacy of its own, and so the step up to frozen isn’t actually that far of a leap.  Ice cream cake is a beloved party dessert (unless you’re Erik), so why not ice cream pizza? 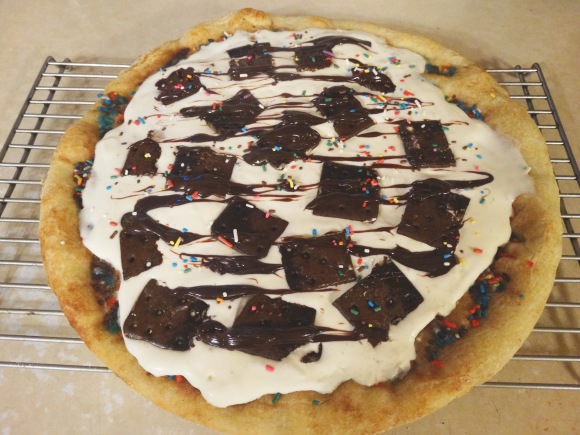 Most of our dessert pizzas require the crust to be par-baked since sweets generally can’t bake as long as savory ingredients without burning.  In this case the crust was the only thing that needed to be cooked and heated we totally baked the crust first.    To make things extra yummy we brushed the crust with butter and sprinkled it with cinnamon sugar before baking.  Halfway through baking we added some sprinkles and a drizzle of caramel sauce (because you know…butter and cinnamon sugar wasn’t enough).

After the crust was done baking we let it cool and let the ice cream soften up a bit.  Once both were at optimal temperature we spread a layer of ice cream onto the crust.  We used vanilla ice cream because we both prefer vanilla ice cream over chocolate and also because it’s the best base for letting other flavors shine. 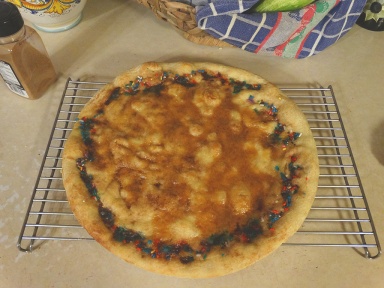 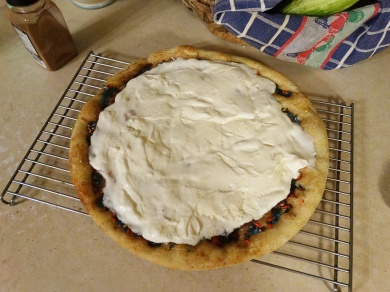 Then we added a layer of the cookie part of a couple of ice cream sandwiches.  Breaking apart ice cream sandwiches felt a bit wrong, but since it was for a pizza we figured it was okay.  And we still ate the inside ice cream, so nothing got wasted.  Then we topped that with some more sprinkles and of course some hot fudge.

The hardest part of this pizza was (somewhat ironically) waiting for the ice cream to re-freeze enough to cut and eat the pizza.  We thought it would take maybe a half hour or so.  We ended up giving up and going to bed and letting it freeze overnight.

How was it?  It was awesome!  As someone who has teeth sensitive to cold I was a little nervous about eating it, but I managed to eat it pain free.  The cinnamon sugar on the crust made it taste kind of like a waffle cone which was an unexpected treat.  Since pizza and ice cream are both staple party foods, and this combines the two, we may start bringing this to the plethora of summer parties we end up going to.  Overall it was just a really great dessert pizza and perfect for summer.  And it proves that almost anything can be turned into a pizza if you really try. 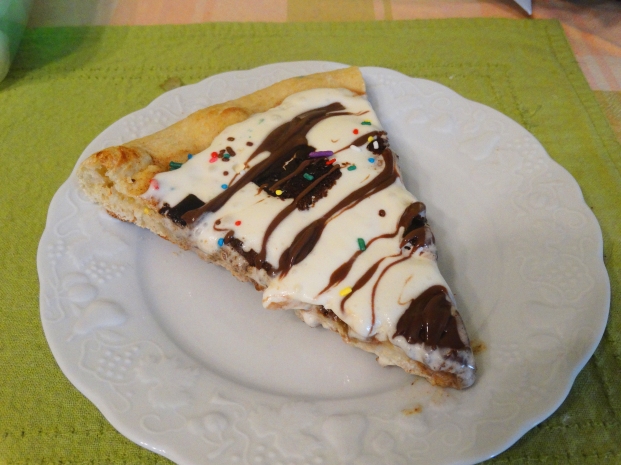