My name is Erik S. and I have a confession to make.

I don’t actually really like ice cream cake all that much.

There, I said it. I said it, I can’t take it back, and I regret nothing. But before the ice cream heavens rain fiery vengeance upon me, let me say in my defense that while I don’t dislike ice cream cake, I just vastly prefer regular-ass ice cream, and think the cake form is overrated.

Okay, still not good enough? Well luckily, I found some middle ground for everyone out there torn between ice cream and ice cream cake: 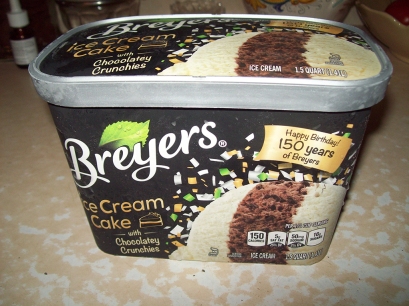 So Breyer’s is 150 years old this year, and to celebrate they came up with this brilliant creation, a variety of ice cream that’s based on ice cream cake. We’ve had cake batter ice cream, but never this, which makes me wonder how we’ve made it this far without someone else doing it. Either way, in the most meta of meta concepts, Breyer’s brought ice cream full circle, but cramming the essentials of ice cream cake into a container. 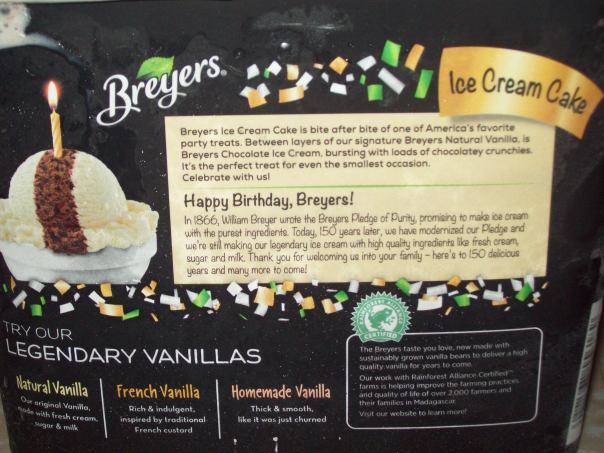 Basically, this variety is vanilla ice cream, sandwiched around a mixture of chocolate ice cream and the beloved chocolate crunchies that everyone wishes there were more of in their ice cream cake. It’s nothing complicated, but it’s a novel enough concept since, as said, I’ve never seen other ice cream companies put something like this out. Considering how many people enjoy ice cream cake just because of the chocolate crunchies, it seems like a given, but who knows… maybe someone like Carvel owned the rights to manufacturing cookie crunchy pieces until 2016.

The ice cream itself is standard Breyer’s. It’s not the greatest vanilla or the greatest chocolate, but they’re both just fine. The main attraction here are the aforementioned crunchies, which are mixed into the chocolate layer. Personally I think it would’ve made more sense to mix them into the vanilla too so it has a fun, speckled look to it, but I guess they were going for authenticity, since the classic chocolate/vanilla ice cream cake only has them in the chocolate part. 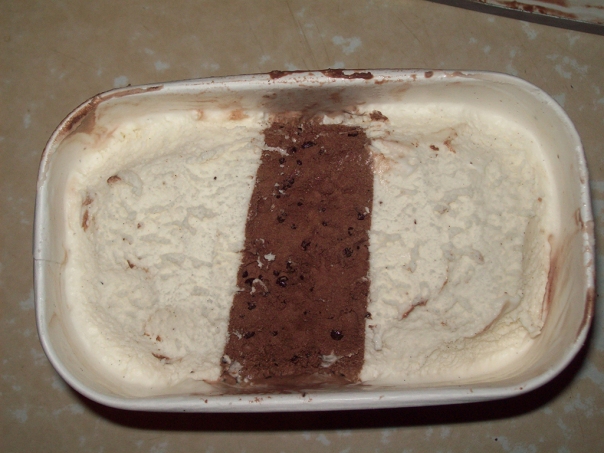 Like other combo-flavors of ice cream, once you scoop them into a bowl, it’s hard to keep the flavors separate. So unfortunately for all those food-OCD sufferers out there, you’re not gonna get to eat each individual layer on its own before moving to the next. The chocolate and vanilla will just marble together as you can see above. That’s not a bad thing, unless you’re REALLY neurotic about eating your flavors in order. Though if you’re putting that much thought and effort into ice cream, you’re kind of missing the point of ice cream in the first place. Regardless, the ice cream is just fine, nothing special. You get chocolate, you get vanilla. Badda bing, badda boom.

The chocolate crunchies, meanwhile, do add a different dimension to this variety. They don’t seem like they’d make much of a difference, but really they’re what makes this a totally viable ice cream flavor. Without them, it’d just be chocolate/vanilla combination in one pack, which has been done in a bunch of different ways already. The crunchies themselves aren’t quite as crunchy as they are in a fresh ice cream cake, but they still get the job done. You get a nice crunch added to each bite, thanks to them. And actually, once you get your scoops in the bowl, it doesn’t matter that the vanilla doesn’t have crunchies since it all just sorta melds together. 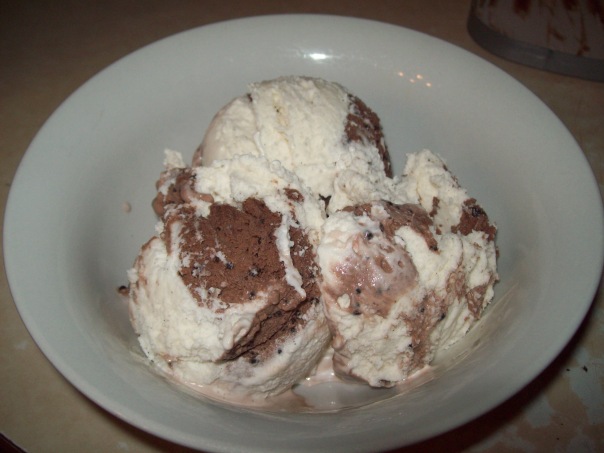 The one, one small criticism I’ll give to Breyer’s ice cream cake ice cream (besides being a mouthful) is that it lacks one of the more overlooked components of real ice cream cakes, the fudge/syrup layer. I will absolutely admit that it would be difficult for them to put that into the ice cream, since it’d just freeze solid and wouldn’t really resemble the gooey, fudgey version we know and love. Luckily, you can bypass that issue by adding your own chocolate syrup or hot fudge. And honestly, if you add whipped cream on top, your sundae will 100% taste like real, actual ice cream cake. It’s a fun experience getting that same flavor in the form of a sundae, since the metaphilosophy of it all is wayyy deeper than ice cream deserves to be…

Like really, they took ice cream, morphed it into a form that resembles another dessert, cake… then created something new, the concept of ice cream cake… and then Breyer’s took that new dessert and returned it into its base form of ice cream, but with the constituent pieces intact… and it’s just really trippin’ me out for some reason… 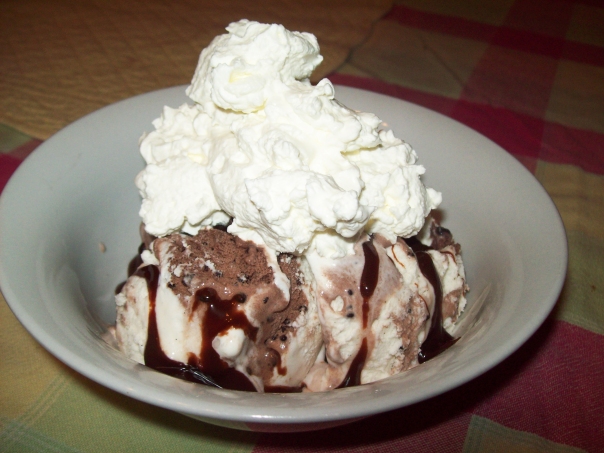