It seems that this year instead of the “Do Us A Flavor” contest Lays is doing the “Passport to Flavor” contest, with four new limited edition global flavored potato chips.  I guess they got tired of having to sort through entries like toenail fungus and unicorn meat and decided to send people away.  I’m not really all that interested in the contest itself, but some of the global inspired flavors have caught my attention.  First I want to take a minute to ask: where is our royalty check for the Greek Tzatziki flavor?  We suggested practically the same exact flavor (a potato chip where the main flavor is tzatziki sauce) in the Do Us A Flavor competition two years ago.  We didn’t even make it to the finals, and now here it is as a flavor.  Hmmm.  Anyway.  The other flavors are Chinese Szechuan Chicken, Indian Tikka Masala, and Brazilian Picanha.  The one that really caught my attention was the Indian Tikka Masala.  A treat that Erik and I both enjoy when we go to the Indian buffet is dipping the vegetable (including potato) pakora in the tikka masala sauce.  It’s really yummy.  So I was intrigued.  I had the feeling that this could be a good chip.  Erik was much more skeptical however, that they could really capture the essence of tikka in a potato chip. 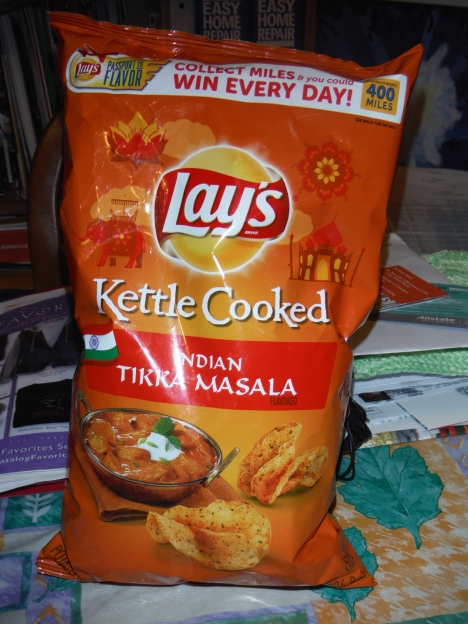 I saw them in the store today and decided I had to find out.  The tikka masala flavor is the only chip that comes in kettle cooked, which is fine.  I’m down with kettle cooked chips.  They’re super crunchy.  I was pleasantly surprised when I opened the package that it smelled vaguely like an Indian restaurant.  That was a good sign.  Then I tried one.  And you know what?  It was pretty damn good.  Does it taste exactly like eating chicken tikka masala?  No, but it’s pretty much impossible to capture creaminess in a potato chip.  But it definitely has an Indian flavor to it that’s very enjoyable, assuming you’re a fan of Indian food.  If you don’t like Indian food, it’s fairly safe to say you probably won’t enjoy these chips.  But for Indian food fans, they’re worth giving a try.  They do have a bit of a kick to them.  By the end of eating a bunch the spice was starting to be a bit much for my mouth, but I’m an immense weenie when it comes to spiciness. 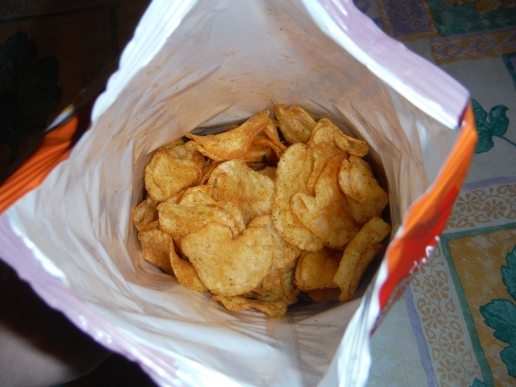 Sorry this isn’t scratch and sniff

Overall I really enjoyed these chips.  They’re crunchy and spicy (both heat and spices-wise) and a nice snack.  If you want authentic Indian food you’ll still need to go to an Indian restaurant, but if you want a quick Indian inspired snack, these are great. 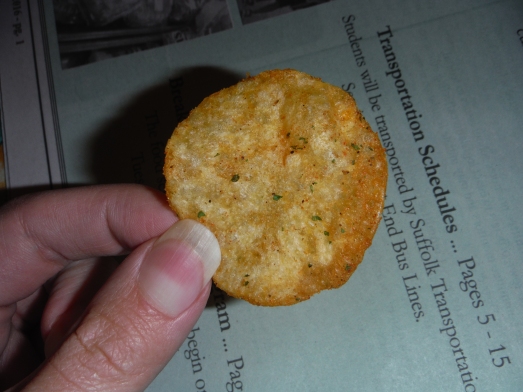 Posted on August 19, 2016, in The Snack Report and tagged crazy crossovers, It's a winning combination, potatoes, review, smells, snacks, yummy. Bookmark the permalink. Leave a comment.