← Pizza Lab #27: Irish Flag Pizza
We Can Do It Better: How To Make A Homemade Gordita →

I think I’ve mentioned before on here that fried foods get a bad rep. Sure, if you roll on down to Burger King and wolf down two boxes of fries, then yeah that’s a bad idea. But homemade food that’s fried in healthy oils and served fresh can be pretty innocuous when it comes to their nutritional content. When cooked properly, homemade chicken fingers or french fries can contain very little oil left on them, and the little bit that’s there will mostly contain healthy, unsaturated fats with virtually no cholesterol.

But obviously the downside here is that buying healthy oils like canola can be a bit more on the expensive side. Fortunately, there’s a really easy way to cut down on its costs: saving your used oil after you finish frying.

Yes, you can save your oil after frying foods like french fries and other delicious meals. Oil has a fun quality which is vital to its use in creating nice, crisp foods, as well as making cool science projects and lava lamps. As you know, it’s much denser than water. That might not seem like a big deal, but it’s actually handy because it prevents it from getting dirty pretty well. Most food ingredients are pretty water-soluble, which means they’ll dissolve and mix into water easily. However, when it comes to sitting in oil, they’ll just sorta, well, sit there. Hence the idea of frying, you’re evaporating all the water, without the food getting soggy, since it floats in the oil but doesn’t really absorb it. As such, for most fried foods, if you keep an eye on whatever you’re cooking, tend to it when it needs tending, and get it out of the pan when it’s done, the oil should stay pretty clean. Don’t believe me? Here’s a pan of oil that went through three batches of french fries:

So yeah, there’s a few little specks here and there, but honestly those aside this oil could pass for “new” anyday. And fortunately, it’s not rocket science. You can tell if your oil is dirty. If it looks cloudy or has a lot of sediment in the bottom that’s clumping up, or it has a dark/burned quality to it, then yeah don’t bother saving it. But as mentioned you can avoid most of that stuff if you fry your foods correctly.

Saving it is pretty easy too. Pretty much wait until the oil cools down to room temperature. Run it through a strainer or a sieve, to get any of the chunks out. If it looks clear, grab a funnel, throw it on top of the bottle it came in, and add it back into the remainder. 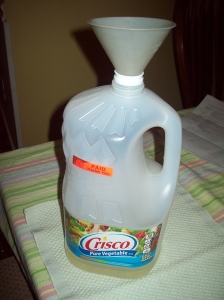 This can be done a number of times before you really need to change it. As long as it’s clean looking, it should be safe to cook with. The only sign it’s no longer good is if it went stale or rancid, which takes a while if it happens. Just give your oil a sniff before using it to make sure it’s alright. If it smells a bit off, then it’s time to dispose of it. If it still smells of oil, you’re golden. Keep using it and you’ll go months without having to buy new oil! Depending on how often you fry foods, this can add up to a lot of money pretty quickly. Best of all, it’s safe and easy.

Posted on April 2, 2015, in Cheat Codes and tagged french fries, knowledge is power, On the cheap, pleasant surprises. Bookmark the permalink. Leave a comment.

← Pizza Lab #27: Irish Flag Pizza
We Can Do It Better: How To Make A Homemade Gordita →