Let’s talk St. Patrick’s Day. We wanted to do some sort of Irish-themed pizza for Pizza Lab this month. And yes, I guess I have to ask ‘what foods do you think of when it’s St. Patrick’s Day?’ Yeah, yeah, everyone’s gonna say corned beef and cabbage to which I reply, if I can conjure my best 90s teen-girl, a whole-hearted “What-everrrrr.” Aside from not actually being a traditional Irish dish, corned beef just plain sucks. Sure I’m a little biased on account of my not eating red meats, but how good can a meal be if 99% of the people in the country it’s most popular in only eat it for about two weeks out of the year? Yeah, screw that. Not to mention native Ireland essentially makes fun of Americans for their obsessive and erroneous association with it to Irish cuisine.

Instead Meg and I decided to put together something a bit more whimsical, trying our best to create a pizza inspired by the colors of the Irish flag. This presented an interesting concept since generally foods don’t get grouped together by color, as colors don’t generally represent flavor. It also was a unique challenge since it required some careful  brainstorming on what foods work well together, while keeping in the color theme.

Basically, we needed a green ingredient, a white ingredient, and an orange ingredient. Green was easy enough considering the high number of vegetables and plants that are green. Since peppers are a common pizza ingredient we selected them as the ‘green’ of the Irish flag. Piece of cake. On top of that, we researched some traditional Irish sauces/gravies much like we did with German sauces in our Limburger pizza. We discovered a simple parsley sauce in Irish cuisine which was made using milk, flour, parsley, and a few other ingredients. That worked out pretty nicely since we needed green and white ingredients already.

The more challenging part of this experiment dealt with finding an orange ingredient to use. Strangely enough, there’s not a lot of orange vegetables out there. Some of the more obvious ones presented a couple of problems. Peppers can be orange, but if we used them, we’ll basically have an all pepper pizza, which is nothing new or exciting. Carrots were considered too, but we recently used them in our chicken soup pizza and didn’t want this to be too similar. Sweet potatoes meanwhile are very orange, and while not necessarily associated with Ireland, they are still a potato and if there’s one thing Ireland loves as much as whiskey, it’s potatoes.

We used this Pizza Lab as a means to do some additional experimenting as well, since we admittedly aren’t tremendous fans of sweet potatoes. The biggest problem with sweet potatoes is that they’re already incredibly sweet, yet most people feel the need to throw even more frigging sweet on top of them. They’re called SWEET potatoes, they don’t need additional sweetness. Marshmallows? Powdered sugar? Maple? Ugh, enough! Meg and I actually found that the one way we both liked sweet potatoes was in tempura, with a nice soy dipping sauce, since it creates a nice sweet-salty contrast. Luckily we found this bangin’ recipe for soy-glazed sweet potatoes, and instantly jumped on it. The end result was delicious and we ended up using them on the pizza.

Last but not least, we used mostly mozzarella cheese, since, well, white. We threw a little tiny bit of cheddar into the mix too just for a little variability in the cheese, both color and taste-wise. 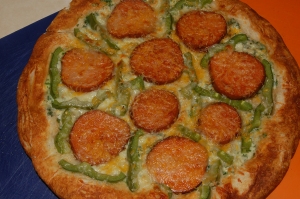 Admittedly, when you look at the pizza it doesn’t scream Irish to you, but we set out to use green, white, and orange and that’s exactly what we did. It could’ve used a bit more white, so maybe we should’ve left the cheddar out, but oh well. As far as how it tasted, it was decent. Nothing groundbreaking, but just fine. The sweet potatoes were great with their soy glaze, and the creamy sauce and cheese complemented their flavor well. Perhaps the biggest letdown here was the peppers, ironically. It might’ve just been a bad pepper, but they really watered down the rest of the tastes, and just sorta sat there as big, slimy mushes with little of their own taste. Like I said, it’s definitely possibly that it was just a bad pepper considering it’s not their season, so maybe we can revisit the concept at a later date when fresh peppers are available.

Was the pizza a success? More or less, yeah. With a little tweaking it could certainly give off a better Irish colors vibe, with smaller potato pieces, and more mozzarella cheese. Additionally, we did try our trick of giving the crust a baking soda wash once again, and miraculously this practice (while fulfilling its duty of browning the crust) makes the outer crust taste a lot like a pretzel. Food chemistry is freakin’ weird, but hey pretzels are awesome so we’re not complaining. Oh and as an added bonus, it’s totally a vegetarian pizza! So bonus points for that!