It’s long been a tradition in my family that come Christmastime, my parents have family and friends over for a traditional German meal. One thing that always confused me however was the addition of homemade potato pancakes, also known as latkes. Generally most people associate them with Hannukah and Jewish people. Not for nothin’, but we’re all Christian in my family, so I never really got the connection. Fast-forward to me being an adult and having a more worldly view of, well, the world; I discovered that potato pancakes actually share a pretty wide open history, being eaten by lots of cultures. Specifically, Germany has a big history of eating potato pancakes. Suddenly, everything made sense to me. And by everything, I mean the fact my parents were serving them at a German meal. No matter whether you’re Jewish or German or whatever, latkes are delicious. Spoilers: They’re also incredibly easy to make.

There are two methods you can do to cook these delectable potato snacks:

Griddle: This produces flatter, more crisp pancakes. In doing so they feature no oil and are marginally healthier for you if you’re trying to cut out extra calories!
Griddle Instructions: Heat a stovetop griddle or frying pan over a medium flame, and spray with non-stick coating. Pour the batter in 3-4″ circles and cook several minutes until bottom is golden brown. Flip pancake and repeat with the other side until it is thoroughly cooked.

Shallow/Deep Frying: This will create latkes that are fluffier and more moist. Obviously they’re a little higher on the fat side due to the oil, but if you use canola or other healthy oils it shouldn’t be a big deal.
Shallow Frying Instructions: In a medium frying pan pour oil to a depth of about 3/4″ and heat until oil is ready. Load the pancakes into the oil as 4″ circles with a large spoon and fry until golden brown around edges. Flip over with a fork and fry until they are tan on both sides. Remove and drain well in paper towels. 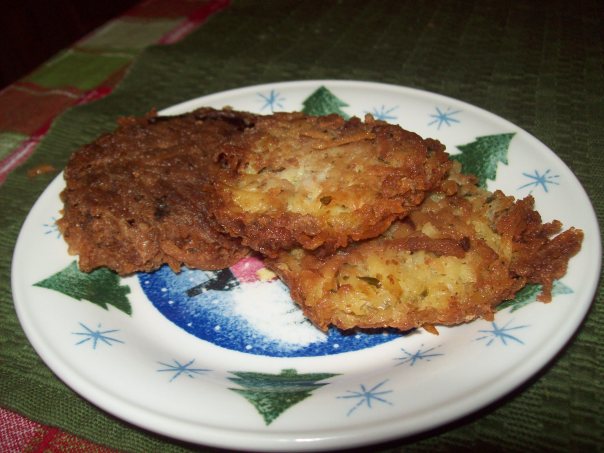 No matter which method you use, they come out perfect and simple. They’re great on their own or can be eaten with apple sauce, sour cream, or ketchup. Enjoy them at Hannukah, Thanksgiving, Easter, who the hell cares. Just enjoy ’em.