One of the more interesting but benign trends Japan has gotten into over the past decade or so has been the rise of fancy flavored Kit-Kat bars. Obviously, in America we simply know them as plain wafer cookies coated in boring milk chocolate and pretty much nobody likes them, since after you’ve eaten one there’s not a whole lot compelling you to ever eat them again. However as weeaboos, otaku, and even people just casually aware of Japanese culture have found out, Nestle actually expanded the Kit-Kat brand into bold, delicious new territories in Japan. There’s more than just the one or two types you see in the west here; Kit-Kats come in dozens of different varieties in Japan, ranging from delicious to interesting to downright insane. Stawberry? Got it. Sweet potato? It’s sweet. Spicy wasabi? You bet your ass they got wasabi. Virtually everything is a Kit-Kat flavor in Japan. Long have I wanted to get my hands on some of these magical flavors, and ironically we ended up finding them not in the multiple Asian grocers we frequent around here, but instead in a gawdy candy store we visited on our trip to Baltimore. 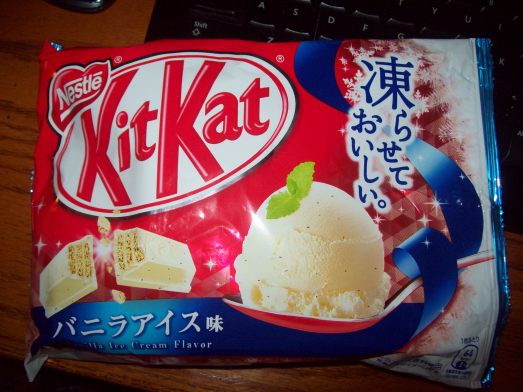 Fortunately or unfortunately, depending on how you look at it, the flavor we found, vanilla ice cream, is unique but not actually too outlandish.  Regardless, I wouldn’t let up an opportunity like that pass me up. It was about $8 bucks for a bag of thirteen Kit-Kats. I’ll admit that’s a little bit on the pricy side, but that’s to be expected when dealing with imported goods. Obviously, this isn’t a staple snack to make a habit out of eating, however considering it’s sort of a ‘cheap luxury’ I let it slide. 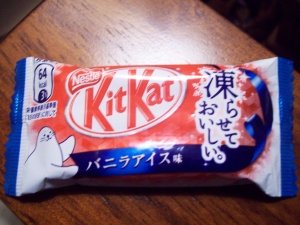 The overall layout is the same as a normal Kit-Kat, but instead of milk chocolate, the coating is a white chocolate surrounding the wafers. That sounds a little plain, especially considering that white chocolate tends to kinda suck nowadays, but to be fair most foods that appear to be using white chocolate are actually using gross ‘candy coating’ or ‘white chocolate flavoring’ instead, which all tend to have nasty chemical-y tastes that leave a greasy residue in your mouth.

If I may get high-brow for a moment, white chocolate itself isn’t technically chocolate in the sense that it doesn’t contain any cocoa solids, which are basically the brown solids that make chocolate chocolatey created from processing cocoa beans. Despite that, white chocolate kind of is sort of almost chocolate since it is made from cocoa butter, the milky fat derived from said cocoa beans. The aforementioned imitation shit like candy coating is usually made out of cheap ingredients, containing no cocoa butter. So in other words they’re mostly just fat and oil and sugar. Hooray! 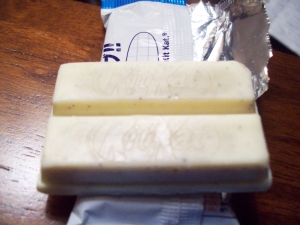 Going back to the Kit-Kats, these are in fact real white chocolate, containing cocoa butter and everything. So that’s already respect points in their corner. However, I should remind you that these are called vanilla ice cream, not white chocolate. And that’s actually what makes these so good. In addition to the real white chocolate, they add in some other flavors like actual real vanilla bean paste as well, which makes these things taste honest to God like real freaking ice cream. I’m not kidding, these taste 100% like if you took some ice cream and let it melt, and dipped a cookie in it. There’s a lot of yummy foods out these, but something about these Kit-Kats tastes just downright pleasant. I don’t know what it is. The flavor is somewhat subtle, but it’s still instantly recognizable. It lingers in your mouth after, but doesn’t leave any weird residue or bad tastes behind. I absolutely love them and they’re currently in the running for one of the best candies I’ve ever eaten. 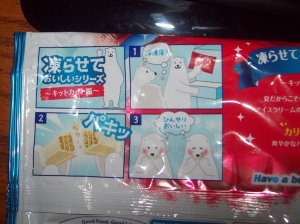 Interestingly enough, if my Japanese isn’t too rusty, the back translates to saying these are part of the “Frozen and such Delicious Series” which depicts some unrealistically adorable polar bears freezing their Kit-Kats in the freezer. I’m no stranger to freezing chocolate and other treats to change it up, especially in Summer, so I figured I’d take their advice. Afterall, they’re polar bears, when it comes to cold stuff they know their shit. I mean, it shouldn’t come to anyone’s surprise, but they still taste awesome, and freezing them emulates the idea of vanilla ice cream anymore. These things rock, man.

Also it didn’t come to my attention until AFTER we bought these in Baltimore that you can actually fairly easily buy wacky Japanese Kit-Kats on Nestle’s Amazon store. Go figure.

Should you Vanilla Ice Cream Kit-Kats?

(provided you can acquire them)