I’ve covered peanut butter cereal before, and as mentioned I am an ardent fan of peanut butter. I eat it on ice cream, in milkshakes, on toast, on pancakes, you name it. So this one took me by surprised when I went into the supermarket for a routine visit, last week: 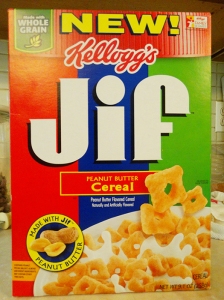 Obviously this isn’t the first time we’ve ever seen another product turned directly into a spinoff cereal, but this one’s interesting in that it sorta gives off a ‘Why Didn’t They Think of This Sooner?’ kinda vibe. It’s nothing genius, it’s just cornmeal cereal flavored with peanut butter. The cereal itself is kinda random, mostly because of the shape which inexplicably resembles a piece of peanut butter toast which was cleanly impaled. I suppose they could’ve been going for a pseudo toast-shape but wanted to avoid obvious comparisons to other toast-themed cereals, but still they look, well, dumb for lack of a better word.

Fortunately the only flaws in Jif Peanut Butter Cereal are cosmetic. It tastes like its namesake, and actually is one of the best peanut butter cereals I’ve eaten. It nails the nutty flavor without being too bitter or salty. It is cereal after all, so there’s no need for it to taste like fresh, hot, salty, roasted peanuts. It’s super smooth and the cereal milk it leaves behind tastes more or less the same. 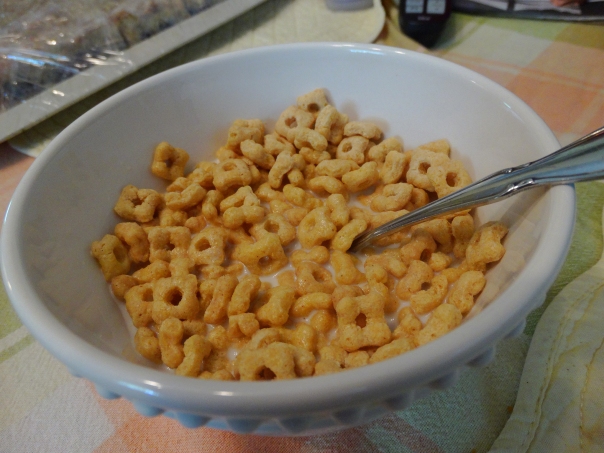 One thing that does really stand out to me is that Jif Peanut Butter Cereal is actually pretty decently good for you as far as cereals go. One serving, a moderate 3/4 cup, is only 100 calories with almost no fat and has less sugar than most of its competing cereals, namely ones which feature actual flavor. I guess that’s the benefit since peanut butter is pretty strong tasting without much need for lots of sugar or other garbage pumped into it. Interestingly enough, the ingredients state it’s made with straight up peanut butter, not flavoring or a bunch of compounds to substitute it, it just lists peanut butter (which is broken down into its individual ingredients obviously, but I digress). Good for them! I’d totally be making fun of them if they made a cereal themed entirely around Jif brand peanut butter, without actually putting the real thing into it.