← Getting the Most Out of Ingredients
Food 101: How to Sauté/Pan-Fry Chicken (And deglazing too!) →

It’s interesting to think there’s been ten Pizza Labs already. One a month, and we’ve got plenty more in the pipeline, trust me. That brings me to our first Fall-themed Pizza Lab! One of my favorite Fall foods/crops is apples. And actually not just Fall-wise, apples are some of my favorite food period, since they’re a delight to eat. A good apple is crisp, sweet, refreshing and juicy. Eating one is so frigging good that it’s basically like eating and drinking at the same time, considering how juicy and pleasant they are compared to some of your less juice-filled fruits (I’m looking at you, mangosteen). One perennial apple dish we all enjoy this time of year is none other than apple crisp, a delicious baked amalgamation of oats, sugar, spices, and apple slices. Which incidentally sounds way too much like some sort of stupid autumnal nursery rhyme adage, but I digress. This was the perfect opportunity to try and bring apples and pizza together in some holy-ass food matrimony.

Erik S. So we have been pretty much drowning in apples lately.
Meg A. That we have. Though I think “crushed by” is the more appropriate term since we didn’t make enough cider to drown in. But I’m pretty sure a sink full of apples would do some damage.
Erik S.This is true. And all being said, I’m not complaining either. Apples are my favorite fruit afterall.
Meg A. They are really yummy. Though actually, we had the idea for this pizza way before the onslaught of apples occurred.
Erik S. Yeah it’s going way back actually. This pizza was conceived in thought back when we were discussing our pretzel pizza.
Meg A. Yup! I’m really glad we saved it for its own pizza though.
Erik S. Yeah, it was a long time coming since apple season was months away at that point, but it was worth it. I am definitely spoiled, having an apple tree in the yard.
Meg A. You are very spoiled. Some of us actually have to leave our driveways to go get apples.
Erik S. Well I also don’t eat apples the rest of the year, so it balances out.
Meg A. I suppose.

Despite our inspiration for Apple Crisp Pizza being the Fall season, as mentioned in the blockquote, the idea for it actually came up months and months ago around the time we were pioneering our Pretzel Pizza. Along the way we contemplated the need for fruit or other toppings for the dough, aside from its cinnamon-sugar, honey, and mascarpone cheese. One idea was the possibility to use apples since they’re traditionally lopped together with cinnamon and other rustic spices of the sort. In doing so, we had a moment where cartoon lightbulbs appeared over our heads, and the idea for Apple Crisp Pizza took place. Though great in concept, it would have to wait a few months since apples don’t really grow in June, nor do people eat apple crisp as a dessert in the summer (decent, God-fearing people at least). 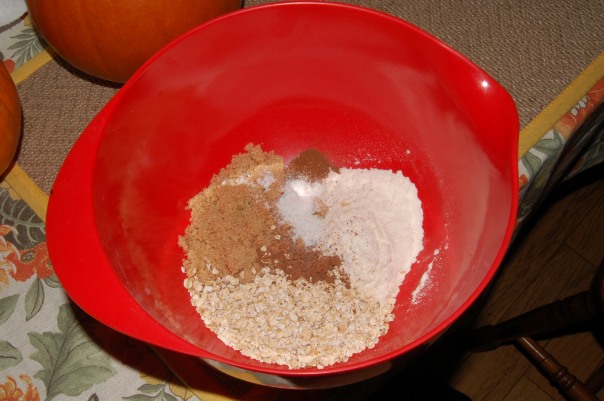 Meg A. So we ended up using apples from your tree for the pizza. We only needed two, right?
Erik S. Yep. That’s all it took.
Meg A. So in our pretzel pizza planning, we were looking for ideas for different toppings to use on it. One of them was apples, which then brainstormed into the idea for a pizza based on apple crisp, a perennial favorite during the Autumn season.
Erik S. And we did end up taking the idea of using mascarpone to use on both pizzas. (Because all pizzas must have cheese!)
Meg A. Yep! Mascarpone is quite versatile, and incredibly delicious. And possibly sexy.
Erik S. We don’t know that yet… we’ll have to find out one of these days. You know…for science…
Meg A. Yes. For… science.

So apple crisp is a pretty easy dessert to throw together. You essentially combine brown sugar, spices, rolled oats, and flour into a bowl, cut it with butter, and glob it onto a bunch of apple slices in a baking dish. This made it awesomely easy to translate it into the pizza world, since what are all pizzas baked in? Correct, a pizza pan, which is essentially a metal baking dish. Hell, I’ve even seen some apple crisps made in pizza pans before. The recipe practically invents itself! As such, all it took was a quick mixing up of a batch of apple crisp mixture, and it was ready to be glooped onto the pizza, which already had apple slices in tow.

Oh and not to go all Emerill on you, but we kicked it up a notch by coating the outer crust in cinnamon-sugar. MAB!! (Because for all I know, he very well could’ve copyrighted the term ‘bam’). 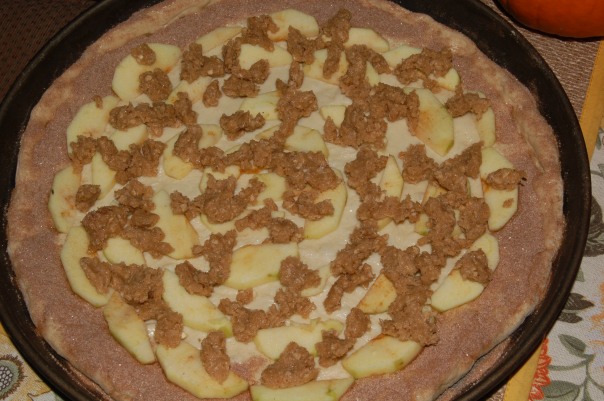 Erik S. Cheese aside, this pizza was incredibly simple. We selected mascarpone right off the bat, we already had apples, so the last part involved was the ‘crisp’ part.
Meg A. And that’s easy enough, since it’s mostly just rolled oats, butter, and spices.
Erik S. Really this was probably the easiest, and most affordable pizza we’ve made in Pizza Lab yet. The only real pricey thing was the mascarpone.
Meg A. It really was. After crunching the numbers, we concluded it probably wouldn’t’ve cost more than $15 bucks.
Erik S. Yep! Especially since most of the ingredients are pantry staples. Plus, it also took the shortest time of any of our pizzas too!
Meg A. And on top of all that, it was really yummy!
Erik S. Yeah taste-wise it was one of the best. It’s interesting, the Pretzel Pizza was also similar in all these things.
Maybe dessert pizzas are just naturally better than savory pizzas?
Erik S. Hm. I don’t know if they’re necessarily better…it’s probably just harder to go wrong with dessert pizzas. There’s way more flavor components and ideas that can go awry in the savory pizzas.
Meg A. Yeah, plus they’re more complex and thus more work.
Erik S. Both have their merits though. We love pizza too much to play favorites.

Like its sister, the Pretzel Pizza, this one was dabbed with generous dollops of mascarpone, since it’s a dessert pie afterall. Also, in case you’re reading this and don’t know what mascarpone is from our other posts/Italian-American family, it’s essentially a type of sweet, cream cheese. A little less tangy than American cream cheeses, this Italian counterpart is a little creamier, and has just the subtlest hint of sweetness to it. We’re prooobably gonna be using it on all our dessert pizzas at this point, so remember that for next time. With the cheese on, the pizza was ready for baking. 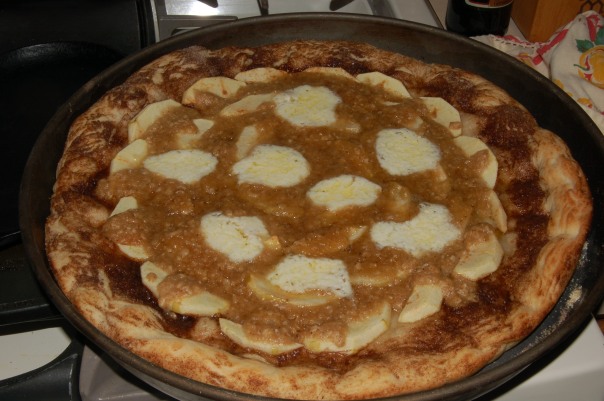 Disclaimer: No it isn’t burnt, remember we MABBed it up with some cinnamon sugar?

Erik S. The only other nuance with this pie was that the dough was strange, but in a fun way. The center was very thin, and got progressively thicker as you got to the outer crust.
Meg A. Right. I think that happened because originally the dough was a little small for the pan, so I got fancy in my stretching of it, and ended up over-stretching it a bit. But as you said, it ended up working out well!
Erik S. Yeah it ended up being an unintentionally neat gimmick that worked out well.
Meg A. Yeah the cinnamon sugar was a great touch, carrying the same principle of the pretzel one in that the crust could be made into a special post-pizza treat after eating the main part.
Erik S. Always gotta pay attention to the crust. It’s the last part of the pizza you eat, so you want it to leave a good impression. Imagine if you had a great, charming conversation with someone new and at the end they just kicked you in the stomach?
Meg A. It’s so disappointing when the crust of a pizza is bad or too burnt/tough/whatever and you can’t eat it and have to throw it out…
Erik S. I know! I am legitimately offended when the back-end of a pizza is overcooked or tasteless. When that happens, I get like, comically angry and seriously want to punch whoever was responsible in the face.
Meg A. We should mention, we used homemade cinnamon sugar for the outer crust. *cough*shamelessplugformyownpost*cough*
Erik S. Oh no I hope you’re not getting sick!

The results came out spectacular, with the apple crisp part melting together and caramelizing deliciously. The mascarpone filled in its spot as resident sweet-cheese, and blended well with the rest of the flavors. And on top of that, like we said, the crust on the outside were just cinnamon-sugar breadsticks. Like I said in quotes, one interesting little part of it was that the dough itself spread a bit thin, but not in a bad way. The midsection was crisp and flaky like a pie crust, and as you ate you way inwards, it more resembled a pizza until you hit the outer crust which was basically just buttery, cinnamon-flavored goodness. Simply put, every square-inch of this pizza was a pleasure to eat. While not as much of a metaphorical (and literal) orgasm as our last pizza, this was different, being a dessert pizza, and one of the best ones we’ve made still. Think of it this way, the Three-Cheese Pesto Pizza was like that smokin’ hot girl you can’t help but wanna bang, and this pizza meanwhile was her younger, adorable sister who’s essentially the girl next door (who you wanna bang). See what I’m getting at? No? Never mind, I’d better stop, this is getting out of hand even by my standards.

Erik S. If we were to rank this experiment, it’d definitely be at the top. Everything came out nearly perfect.
Meg A. It did. If the pesto pizza was perfection in savory ones, this one may be perfection in dessert ones.
Erik S. On our super serious business clipboard, it got favorable circles around everything. Visually, workload, and taste-wise, it was awesome.
Meg A. Yup! It also saved and reheated well.
Erik S. Well, all this considered, plus the fact it was cheap and easy, we can recommend a Pizza Lab to our readers for first time!
Meg A. Yeah!
Erik S. So hear that everyone? Get your pizza asses in gear and start baking.
Meg A. Just remember it was out idea first and we will hunt you down if you steal it.
Erik S. And we have ways to make you suffer.
Meg A. Like limburger cheese and garlic?
Erik S. They won’t know what hit them… 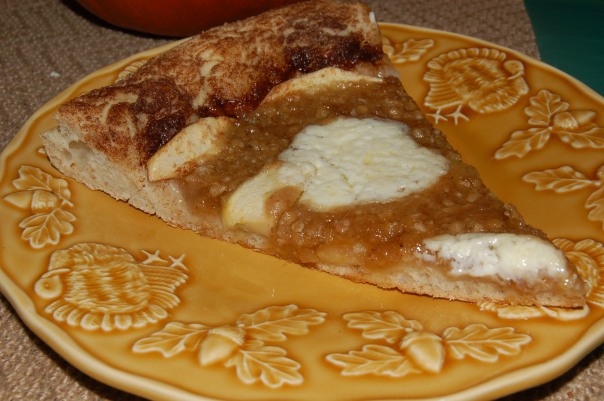 Posted on October 18, 2013, in Pizza Lab and tagged cinnamon, crazy crossovers, dessert, Fall, It's a winning combination, On the cheap, Pizza, yummy. Bookmark the permalink. 2 Comments.

← Getting the Most Out of Ingredients
Food 101: How to Sauté/Pan-Fry Chicken (And deglazing too!) →