Getting the Most Out of Ingredients

When you don’t have handfuls of money to throw at things, it’s generally a good idea to use all of something that you’ve spent money buying.  For some things this is easy to do.  Any pantry staple you buy and then just keep in said pantry until it’s used up.  For other ingredients though it isn’t so obvious, and a lot of times you end up throwing things out.  I’m going to give you some hints on how to use up less obvious leftovers. 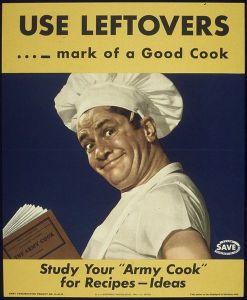 It’s really hard to get a pie crust exactly the right size for whatever its final destination.  You pretty much always need to trim off some extra from around the edges.  Instead of throwing out these trimmings, roll them out and cut them into rectangles (or whatever shape you’d like).  Brush them with melted butter, sprinkle with cinnamon and sugar, and bake.  (You can bake them really at any temperature, especially if you’re oven is already on, but if not, I recommend the standard 350F.  I can’t give a time since it’ll be different for everyone every time.  You’re just going to have to keep an eye on them).  Let cool, and ta-da!  Extra bonus dessert! 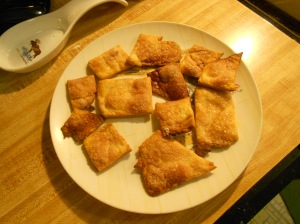 Sometimes a recipe calls for a certain amount of beans as opposed to just the whole can.  If you have any leftovers, just store them in a container in the fridge and you can toss them in salads.

Occasionally you’ll have a recipe that calls for more egg yolks than whites, more whites than yolks, or only whites, only yolks…you get the idea.  Whichever the case, just save what you have left in an airtight container in the fridge.  After that it’s easy enough to find a recipe that needs the part of the egg you have left.  For example, I make my mom an angel food cake for her birthday every year, and that leaves me with about 12 egg yolks.  This year I used the yolks to make a gold cake (after the angel food cake was gone).  Two awesome cakes from the same 12 eggs!  Basically, if you have a lot of egg yolks look for custards or something similar.  If you have a lot of whites look for meringues or other light, airy desserts.

I guess overall the main idea of this post is while I don’t want you to become a food hoarder, just give a second thought before throwing something away.  If there’s something else you can use it for, wouldn’t it be better to use it than waste it?  Just be creative!  For example, Erik and I have a lot of apple mash leftover from making apple cider a couple of weeks ago.  Instead of just getting rid of it all, we froze it in portions and have been using it to make a lot of different things.  So far we’ve used it to make apple fritters, apple cinnamon pancakes, even French toast!  And we have plans to make cookies and cake with it as well. 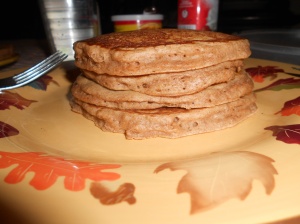 And I’d love to hear any creative leftover ingredient uses you have!