Last week I told of our adventures in Limburger cheese – a cheese that we ordered special from the internet.  This cheese was a much more spur of the moment purchase.  A few weekends ago on our way to the Garlic Festival we visited a local dairy farm.  I mostly just wanted to hang out with the goats, but we also wanted to buy some super fresh cheese. 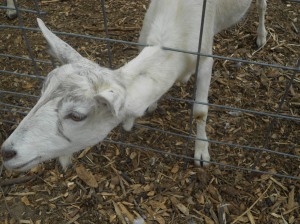 The cheese is that way guys!

It was really nice there because they had a large selection of fresh cheeses made from cow, sheep, and goat milk.  They also had fresh milk, butter, and eggs.  We spent a really long time in front of the refrigerator case trying to decide which cheese to try.  We probably would have bought more if we’d remembered to bring an insulated bag.  But we didn’t want to risk buying a lot of cheese and having it all go bad sitting in the car all day.  Anyway, after a lot of debate we finally decided to buy the goat’s milk ricotta. 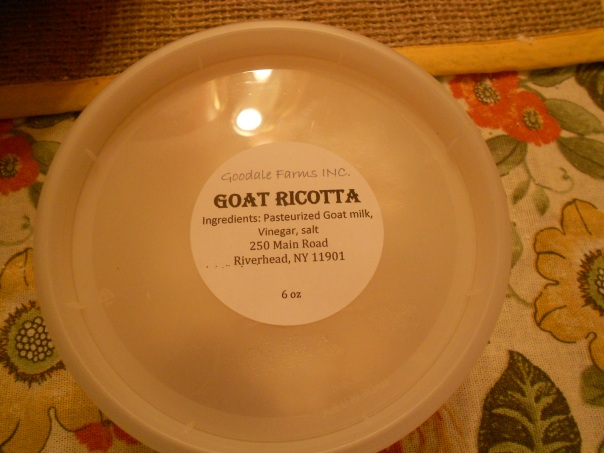 Luckily it held up in the car, and even managed to stay somewhat cool.  First we tried it on its own.  It seemed drier than most cows’ milk ricotta’s I’ve had, and it was certainly tangier.  To be honest, most ricotta doesn’t have all that much of a distinct flavor to it (at least not the kind you buy in the supermarket, which is the kind I’m used to).  But this one had a definite tang.  On its own it was almost a bit too much.  Then we tried it on crackers and it was really good.  The cheese blends really well with other flavors without being overpowered by them. 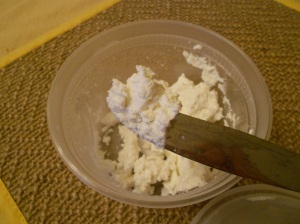 A few days later I used the cheese to make a grilled cheese sandwich (there’s a makeshift recipe at the end of the post).  I also added mozzarella.  It was sooo good.  The cheese got nice and creamy from being heated up, and the mozzarella was nice and stringy/gooey.  And the flavors blended perfectly.  I think it may be my new favorite grilled cheese, even beating out grilled cheese with guacamole.  Erik had some with pasta and said it tasted good and held its own against a red tomato sauce.  I think it’d be really good as a filling, either in a pasta or cheese pie of some kind.  It seems like it’ll work well in a lot of different food settings. 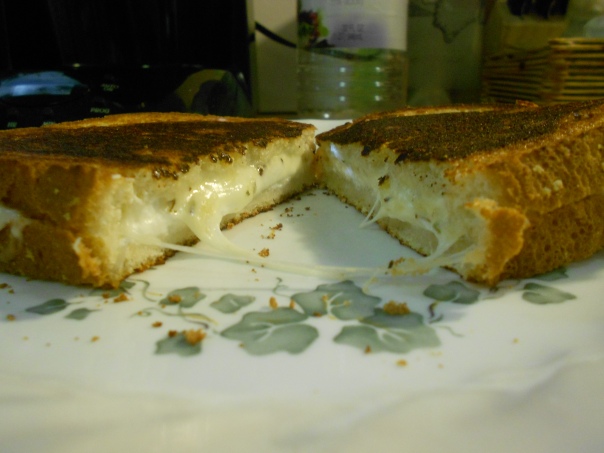 Just look at it! It’s perfect!

Would we recommend goat milk ricotta?  Yes!  If you can find it.

2 slices of bread (I used country white since I wanted the cheese to be the main flavors, but you can use whatever bread you like)

I’m going to assume most people know the basics of making grilled cheese, so I’ll skip those steps.  After putting the first slice down in the hot pan, add the goat’s milk ricotta.  I tried to spread it, but it didn’t really spread, so I kind of just spread clumps of it as evenly as I could.  Then add the shredded mozzarella, and the dash of Italian seasoning.  Cook until mozzarella melts enough to hold the 2 sides together, then flip.  This is important, trust me…I’ve flipped too soon and made a huge mess.  Once the second side is browned to your liking, enjoy!

The goat’s milk put down.