I’ve been told that there are people who, when they come into some extra money actually save it.  Most people I know use the money to buy something fun and frivolous they otherwise would not have.  We meanwhile spent this money on… stinky cheese.

Besides just our love of cheese, the idea for buying this cheese came from a discussion about how in old shows and cartoons like Looney Tunes Limburger cheese was always used as the quintessential smelly thing.

It’s apparently aged using the same bacteria culture that’s found on human skin to make b.o. and smelly feet. It’s even included on the list of Top 10 Stinky Cheeses in the World.  We wondered, what does limburger cheese really smell like?  Could it really smell that bad?  If it did, why would people even eat it?  The curiosity was eating away at us.  Since Limburger isn’t the kind of cheese easily found in grocery stores, and local cheese stores around here sell mostly local cheeses, we ordered it from the internet.

Hey iGourmet, we’re giving you some free advertising…how about some free cheese?

It arrived packed in a Styrofoam cooler to keep it cold during transport.  We took the cheese out of its ice-pack laden house and… it hardly smelled at all!  It smelled a little bit like Provolone, but even to get that smell we had to stick our noses right up against the package.  After opening it, it smelled kind of like sour cream and onion potato chips.  Deciding it was probably too cold (it’s supposed to be a semi-soft cheese, but was hard when we touched it), we left it out at room temperature to warm up.  Slowly the smell did grow.  After letting it sit out for about an hour or so we decided to give it a try.  The smell had definitely become stronger.  But even still we were still disappointed in the lack of smelliness.  We were expecting our socks to be blown off by the stink, but alas, our feet remained fully clothed.  Mostly it smelled like Provolone, feet, and potato chips, which was certainly unexpected, since nowhere had we read that it smells like potatoes. 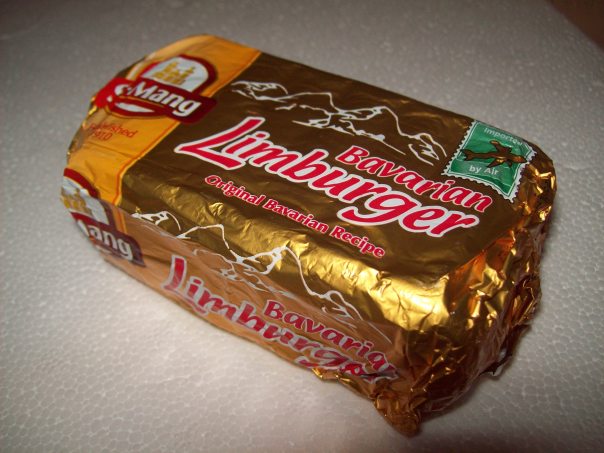 After spending some time smelling it, we decided to see how it tasted.  I really had no idea what to expect.  I think I was expecting it to taste more…smelly.  But all the smell is in the rind, which can be cut off before eating to reduce the stench.  Once the rind was cut off it pretty much just smelled like generic cheese smell.  As for the taste?  It tasted like Cheddar and Mozzarella had a baby, and then you ate said baby on a potato chip.  It was tasty!  We ate it on its own and on Ritz crackers.

The only thing we didn’t really like was the texture, which was a bit more rubbery than we prefer.  But it tasted good, and was a fun experiment.  Now we just have to figure out what to do with the rest of it…perhaps a Limburger cheese pizza lab is in our future?

Sadly the smudgy make-up was not a result of the smell of the cheese… just a long day at school.

Would we recommend Limburger cheese?  Yes, if you have the opportunity.

(But don’t feel like you have to go out and buy it special like we did. Fancy cheese isn’t always cheap!)