The Cereal Report: Count Chocula is back!

Everybody loves Halloween. Everybody loves cereal. Naturally General Mills had a stroke of genius when they decided to market the only Halloween-themed cereals out there as limited-time-only available during the month of October, a few years ago. Now the return of Count Chocula (as well as Frankenberry and Booberry) is yet another time-honored tradition that we can all look forward to every Fall.

Awesome way before Twilight thrust vampires in and out of vogue.

For anyone unaware of Count Chocula (if so, kindly get the fuck off of this blog immediately) it can best be described as a less-flamboyant, chocolate version of Lucky Charms. Instead of tasteless throwaway multigrain cereal, you have chocolate multigrain cereal. Rather than brightly colored, less-than-manly marshmallows shaped like hearts and rainbows and stars, you are treated to ghosts and bats which come in the more badass range of simply white or brown. In case you’re unable to tell, I use the term badass loosely, as demonstrated by the fact I’m applying it to a children’s marshmallow cereal. Then again, I don’t care what you think, since if you didn’t grasp that, you likely weren’t able to piece together that Count Chocula is a chocolate-flavored either.

The cereal is as good as ever, though the five-year-old inside of me desires more marshmallows than it currently has. It’s really not a big deal considering the non-marshmallow pieces probably contain the same lack of nutritional value themselves. The box itself even contains a cute, little comic of Count Chocula and his tragically unhorrifying compatriots Frankenberry (most well known for strawberry flavored cereal that makes your shit pink) and Booberry (most well known for being one of the first blueberry-flavored cereals, and being an absolute stoner) who are getting ready for Halloween. 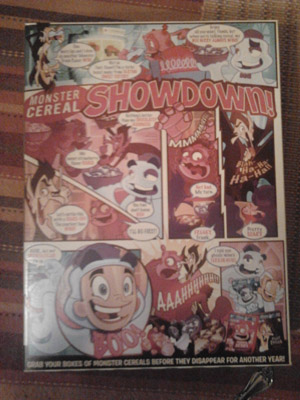 Should you eat Count Chocula?

This shouldn’t even be a question. It’s delicious and it’s a Halloween-themed cereal available only around Halloween. (Unless your local retailers are buzzkills and stock it whenever they feel like it. That would make them the Halloween-equivalent of the Grinch.)

Posted on October 3, 2012, in The Snack Report and tagged awesome, blast from the past, cereal, CHOCOLAAAATE, Halloween, review. Bookmark the permalink. Leave a comment.