In Memoriam of The Colonel: Releasing a Legend, Back to the Universe

As many of our family and friends are aware, this Sunday, the world lost an icon. The Colonel was a dog that many of us thought would live forever. But sadly he passed away in his home, at the age of 14 due to complications with an ongoing infection he’d been battling for months. So many people, even outside our own circle, have had their lives touched by that beautiful creature, and many know his story. But in case you didn’t know, take a seat, and learn about how this dog went on to experience a richer, fuller life, than most of us humans will ever live. 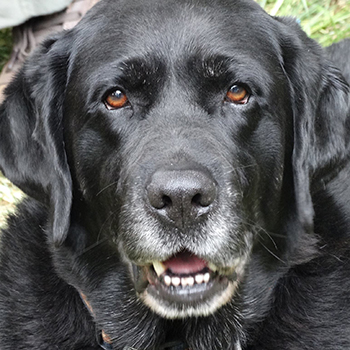 The Colonel was born in Smithtown, NY on the Guide Dog Foundation central campus on April 22nd, 2006. He carried a strong bloodline of multiple champion and grand champion show dogs before him in his pedigree, such as his grandfather The Aviator. His original purpose in life was to be bred to become a guide dog, and he spent one year training for it with our family, before returning to school. He was so well-behaved and had such a strong lineage that he was in the running as a candidate to become a breeder for the foundation! Unfortunately, they discovered during his training that he suffered from hip dysplasia, a condition where the hip socket doesn’t fit properly and can cause arthritis and joint problems. Sadly, this automatically eliminated him from both Guide Dog and Guide Dog Breeder qualification, and subsequently was released back to our family.

Despite dropping out from Guide Dog School, The Colonel managed to touch many lives, winning many fans at Alive After Five, Pet Expos, concerts, parades, and other local events. Most people instantly recognized him as the happiest dog they ever met. In his prime, he was a mighty 85 lbs. of pure joy. He was a mainstay at many Summertime parties, where he was an avid fan of eating watermelon and strawberries. Over the span of his life, he also watched as many other dogs of the family came and went. Since his birth, he outlasted seven other dogs who also passed away before him, and many others who called him friend are still alive today. Part of this involved him also assisting in helping my family foster rescue dogs over the past decade and a half. As a benevolent icon with a lovable nature, he made for a wonderful companion to help other dogs who had been abused, homeless, and suffered other problems before they found their forever homes.

The Colonel’s own life wasn’t without its hardships, however. As all labrador retrievers tend to be, he wasn’t without his mischievous side, and he certainly loved food. In 2008, The Colonel broke into our family’s baking supplies and ate over 2 lbs. of semi-sweet chocolate, which our veterinarian claimed should have been a lethal dosage for almost any dog. Despite this, The Colonel managed to power through and survive, albeit with a substantial amount of vomiting and diarrhea, and an overnight stay at the animal hospital, a day which is now referred to as the “CHOCOLATE SHIT” incident.
In addition to this, several years later, The Colonel, in an insurmountable display of excitability, overpowered someone opening the garage door at my family’s home, which let him escape out into the driveway. Unfortunately, he ran down the pavement and into the street, where he was hit by a car, bouncing 20-30 feet by an unlucky family driving home. The family stopped and understandably felt incredibly guilty about it, but The Colonel got up and walked back up the driveway wagging his tail, with a smile on his face. Despite this, he did suffer several injuries, and again required an overnight hospital stay, for treatment of a broken paw, and a sizable laceration on his leg. However, he made a speedy and full recovery after this. Aside from another health scare in 2018 when he developed a stomach ulcer in his older age, he remained in good health for a dog of his stature, until he tragically developed an infection from an injury to a very sensitive area in his final months.

Many people have had their lives changed for the better because of this legendary creature. The Colonel had several songs written about him, including “TheColonel.EXE” by Gentleman.BOSS, “(The Legends and Lore Surrounding That Burly Beast Known As) The Colonel” by The Red Season, “The Colonel’s Wedding” by Octoberwalrus, and potentially even more that we don’t know about by other local artists. He’s been two two weddings as well! In 2017, The Colonel made a special surprise appearance at Chris and Gina Fleming’s wedding, due to Christopher being a lifelong fan of The Colonel. One of our friends was able to pick him up from home, and chauffeur him to the wedding venue where he donned a tie and entered the dance floor, to the aforementioned TheColonel.EXE, spun up by local DJ Pat McHale. To this day, the largest photo in Mr. and Mrs. Fleming’s wedding album is of the two of them posing with The Colonel after his grand entrance.
In addition to his wedding crashing in 2017, The Colonel also served as an usher at me and Meg’s own wedding last year, in September 2019. While he was late in his years, he was still able to make it to the ceremony, where he greeted guests at the church, once again bringing smiles to all who met him. 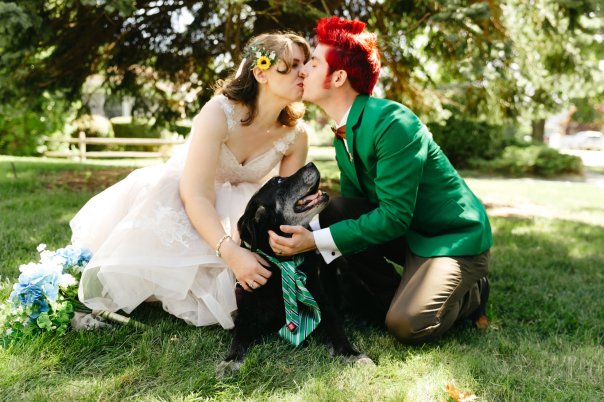 The Colonel was cremated, on Monday May 18th, 2020. As odd as it may sound, we feel a sort of comfort in the fact he was able to pass on his own. No person should have to live with the guilt that would come from extinguishing such a magnificent light of a life. And subsequently, no living being could make the decision for him to leave this world, except for The Colonel himself. A memorial service will be held for him at our annual Dog Party, on July 11th. He leaves behind two adoptive nieces, Tessa, a black lab mix, and Muffy, a terrier mix, as well as his adoptive grandchild Charlie, a west highland white terrier who studied and learned from The Colonel, already adopting the trait of retrieving toys for people when he first meets them. The Colonel’s teachings live on with Charlie, so that he may carry on his grandfather’s spirit.

While it may seem unthinkable that he is no longer with us, our lives have all been significantly improved by the existence of The Colonel. As cliched as it may seem, let us take this time to reflect, and celebrate the unbelievably positive energy that he put out to the universe, rather than mourning the loss of him as a physical being. The Colonel was mighty. He was large. And he was imposing. But never at any point in his life did he exhibit a trace of meanness or hostility. He only brought happiness to everyone who met him. Let his reputation live on in all of us, especially in the dark, COVID-restricted times that we are currently living in. The Colonel may not be with us in person anymore, but he can live on in spirit, so that we may exalt him as an icon, the same way we do with other eternal, beloved icons like Santa Claus and Bob Ross.