As the Fall draws to a close and we all curse under our breath about the impending cold, let’s take one dip into the pool of delicious Autumnal foodstuffs. Pizza Lab has experimented with pumpkins before, but to avoid repetitiveness we went for a more alternate take on the edible gourd, and used a butternut squash instead. There was a point where we actually had trouble thinking up an overarching theme besides just “Fall” but we eventually decided to toss in some smokey flavors since it seemed like a nice complement. Oh, and also because we recently bought a food smoker and smoked meats are reeeeeeally good. 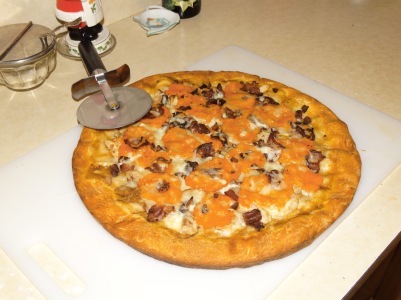 Admittedly, we had a leg-up on this pizza since we had previously smoked a whole chicken and made gravy to go with it a few days prior. But, oftentimes, the best pizza creations start with some leftover food. Obviously, we here at PCFG are huge proponents of using your leftovers effectively, so this pizza seemed like a good opportunity to do so. We started off by setting the gravy down as the sauce base, and added the shredded chicken onto it. 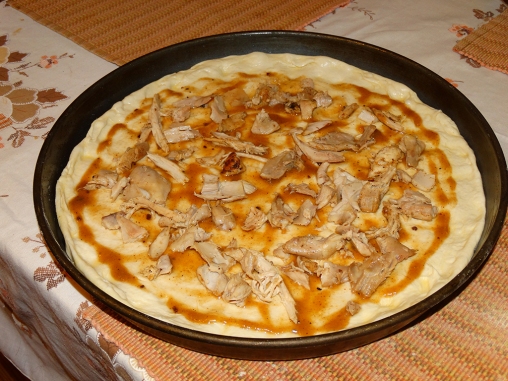 Next came the squash. As mentioned, we used butternut squash, and prepared it with a simple roasting in the oven. Most if not all squash and edible gourds can be made table-ready by cutting them down the middle, placing them in a baking dish with a shallow level of water, and wrapping it in foil. Technically they’re always edible, and you’re more than welcome to sink your teeth into some nice, hard-ass pumpkin skin, but in a situation like this, it’s best to roast them and turn them into a mash. Especially for this pizza, since it let us just dollop the squash on like mashed potatoes.

Additionally, to fit the “smokey” theme, we tossed in some bacon as a bit of a garnish. Admittedly, bacon has failed us before when we’ve tried to use it in pizzas, not being strong enough, or drying out, but we figured on this pie it was just a garnish so it really wasn’t that big of a gamble. 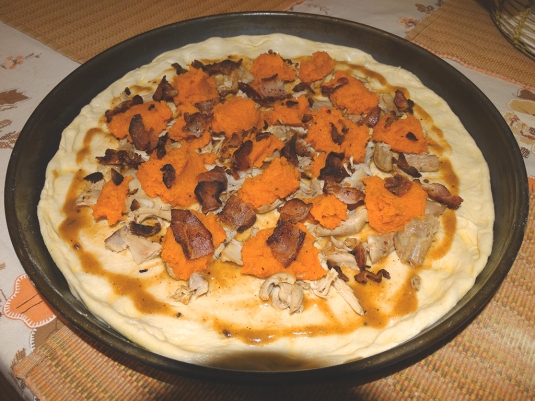 For the cheese, we wanted something light and subtle, so it wouldn’t mask the delicious smoked chicken flavor. Mozzarella is usually the go-to for mellow cheeses in not just our pizza, but all pizzas. But again, we wanted to avoid doing the same old thing we always do with this pizza, and opted for some muenster instead. Muenster is the American version of Munster cheese, which is fairly stinky as far as cheese go. Our version here not only gains a random E in its name, but it also has a smoother, milder smell and taste. Think of it somewhere between mozzarella and monterrey in terms of sharpness. (I.e. not very sharp at all).

The overall flavor came out a bit on the sweet side thanks to the butternut squash. But, fortunately for us, that sweetness complemented the salty vibe coming from the gravy and the bacon pretty well. Actually, the fact we were trying to give it a smokey taste worked out perfectly. The chicken and the gravy’s smoked flavor wasn’t overwhelming but it was definitely there.

This pizza effectively served as a testing-the-waters project, so to speak, since we totally have plans to try flat-out smoking a pizza eventually for the ultimate in smokey-grill flavor on a pizza pie. (Also, please, nobody go out and try smoking a pizza in a drug context. Or if you must, just don’t tell the authorities that you heard about it on Poor Couple’s Food Guide. We don’t need that kind of liability.)