You know it’s the damnedest thing. For some reason over the past 6 months of my life, I have just been craving the shit out of chocolate. Not necessarily junk chocolate you impulse-buy near the register… moreso the finer chocolate confections in life. Stuff like dark chocolate, hot cocoa, high-quality chocolate rabbits, chocolate-covered-everything, etc… And I never really liked chocolate that much, growing up. I never disliked it, but I always made fun of those hokey expressions like “I’m a chocoholic” or “Chocolate makes everything better.”
To be fair, I still make fun of them, but holy hell I cannot shake this craving. If I didn’t know any better I’d say I’m pregnant. (If Meg and I didn’t hate children. Oh and also, there’s the me being a dude part). Lo and behold, we happened upon a fun, little tea shop recently that had Crunchie Bars in stock. I’ve vaguely heard of them in passing, but never actually ate one since they’re not usually sold in the Americas. And man, with top-tier chocolate companies like Cadbury being over there, Europe is freaking spoilllllled. 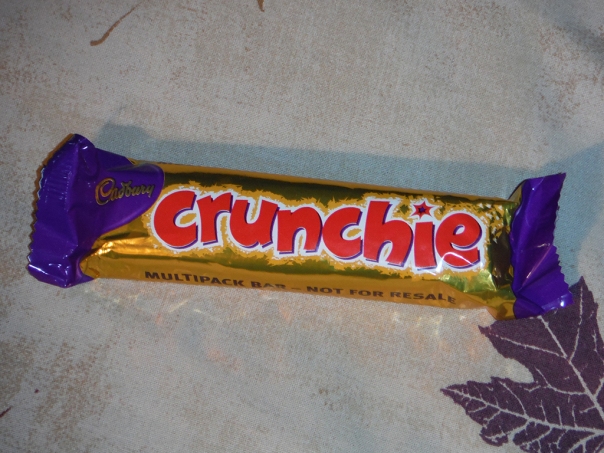 Shhh… don’t tell anyone this wasn’t for resale. HONEST. IT’S NOT OUR FAULT.

If you’re British, you’ll have to forgive this article, since PCFG is based out of Long Island in the U.S. and as such, Crunchie Bars are a bit of a treasure here. The novelty of eating one is still new to us, though I imagine even if you have ready access to these things like they do in the U.K., you can’t get tired of them. I mean come on, they’re so good. 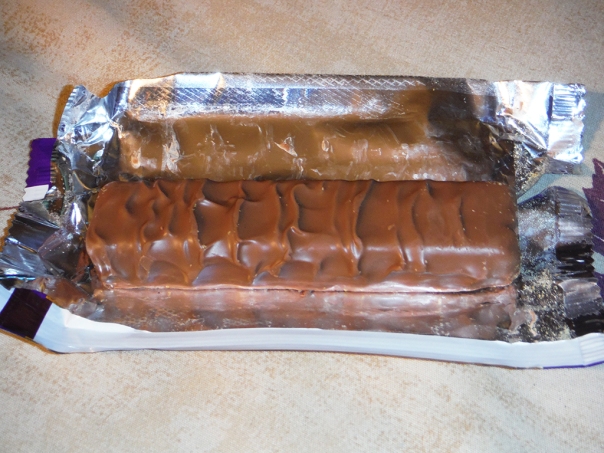 Look at that sexy European chocolate.

For all of our American fans, Crunchie is a chocolate bar made by Cadbury, and distributed basically everywhere except the U.S. It’s an incredibly simple chocolate bar, made up of honeycomb-toffee, covered in chocolate. Admittedly, I had to do a double-take when I read that it was “honeycomb-toffee”, since I have eaten actual honeycombs before, which were pretty tasty. But alas, honeycomb-toffee is something unrelated to bees and honey. Rather, it’s a special type of delicious, buttery, caramel-y toffee that forms a lot of small bubbles when cooked. The result is a really light confection that’s crisp and crunchy, with lots of little pockets of air inside of it. 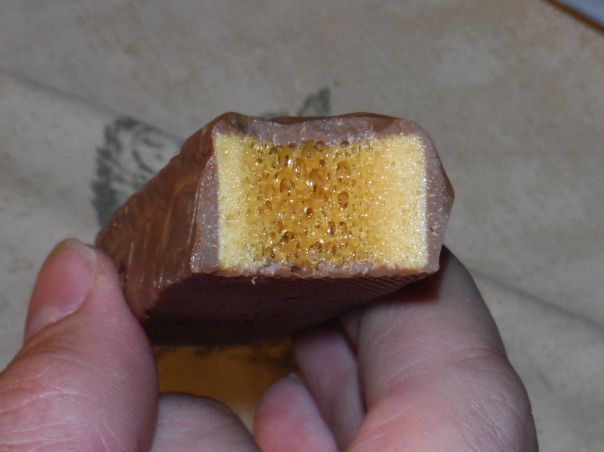 As mentioned, since this is Cadbury you’re dealing with, you’re getting some right-proper chocolate. I don’t know what it is about chocolate made in the U.S., but it just isn’t as good as European chocolatiers… It’s not as creamy or moist or rich… I don’t know. Either way, the chocolate on Crunchie Bars is fantastic. I imagine these bars had to make somewhat of a journey to get from England to the tea shop we found them in, on Long Island. And even then we still didn’t eat it for a week because it ended up inside of a drawer, and, well, we kiiiinda forgot about it. Yes, an absolute mistake. But we made up for it by devouring it with gusto. Despite all that, the chocolate was top notch, and tasted fresh and yummy.

The toffee inside meanwhile, oh man. I’ve never had honeycomb-toffee before, but this stuff is frigging amazing. The texture is just so incredibly. It’s got the perfect crunchiness to it. When you bite in, you get a nice crisp crunch, and it manages to stay like that the entire time you chew. And the flavor is toffee, which is to say it’s rich caramel goodness. It’s almost weird in the most beautiful way possible, since it’s sorta like eating one of those Werther’s hard caramels, except that you’re effortlessly biting it apart into pieces. Crunchie is a brilliant example of simplicity being brilliant. I love these things now. They’re absolute GOAT tier, and they might be one of my favorite chocolate bars I’ve ever eaten. 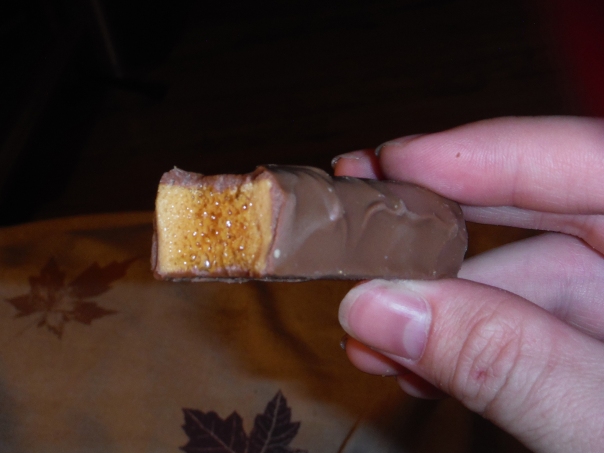 Want to try them for yourself? (Oh my God you can buy 24 of them for $15.) Try our Amazon Affiliates link!

(None of our posts are paid for or sponsored, however if you click these links and buy the aforementioned item on Amazon, we see a small amount of kickback which only benefits PCFG, resulting in better posts and videos for you to enjoy!)

Should you eat Crunchie Bars?