← PCFG Is Off For A Week! Sorry For No Posts!
The Snack Report: Crunchie Bar →

Smoothie Sunday season is almost here!  I better get to work and start coming up with some new smoothie recipes!  In the mean time, I decided to ease into things by reviewing some smoothie products you can buy in stores.  First up is Dole Smoothie Shakers.  These seem to be the option for if you want a quick smoothie on the go since no blender is necessary.  There are seven flavors available (though I only saw two in the store I was in): blueberry banana, pineapple mango, strawberry raspberry, peach mango, strawberry, strawberry banana, and mixed berry.  I tried pineapple mango.  I went with that one because it also has carrot and sweet potato in it, and since I tried making my own carrot and sweet potato smoothies last year, I wanted to see how a different one would taste.  I also I just enjoy both pineapple and mango. 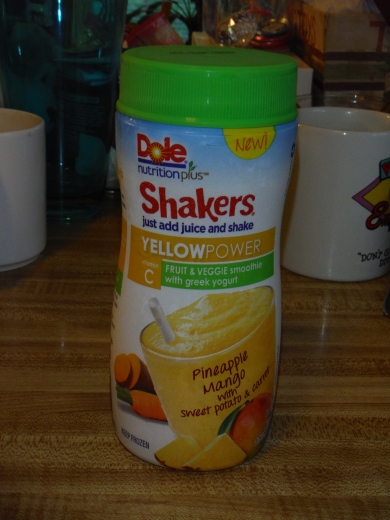 So, how did the smoothie stand up?

The directions are nice and simple, which is always a plus for breakfast items, since many of us are still half asleep when we eat breakfast anyway. 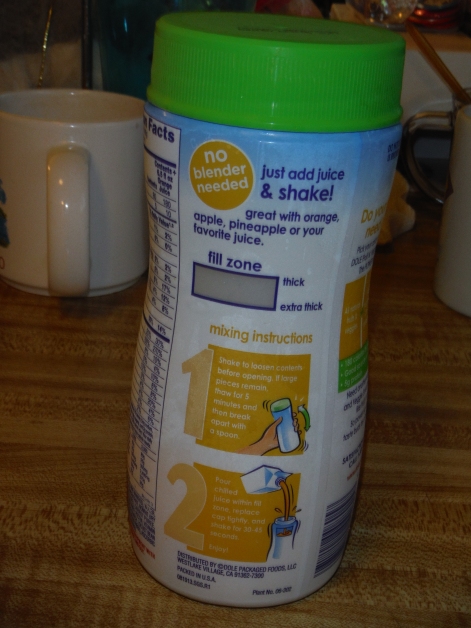 I took my bottle out of the freezer and shook to break up the contents.  Nothing really happened though, so I let it defrost for 5 minutes like they recommend before trying again.  Unfortunately still nothing really happened, so I had to break it all up with a spoon.  Luckily we have those really long tea spoons or that may have been a bit trickier to accomplish. 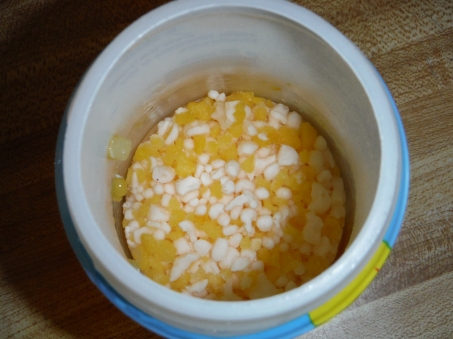 This is what it looked like when I opened it up, before breaking it up with a spoon.

Then I added my liquid of choice; I went with orange juice.  They give two filling options – extra thick and thick.  I filled to the “thick” line.  It seemed like it took more juice than I usually add to my smoothies, though that’s not necessarily a bad thing.  Then I set to work shaking for the directed 30-45 seconds (setting the stopwatch on my phone to make sure I didn’t over- or under-shake).  It’s definitely a bit of an arm workout first thing in the morning.

Presumably a draw of this is that you can just drink it from the bottle so really all you have to do is shake once, add juice, shake again and be on your way.  But I poured mine into a glass for better picture taking.  It’s definitely less smoothie than I get when I make smoothies from scratch.  This was a little disappointing, but I suppose if they made them much bigger the just shake and go gimmick may not work as well.  As for flavor it was pretty yummy!  At first I thought maybe it could have used a bit more sugar, but after a couple of sips I realized it was fine as is.  I’m sure it tastes different based on what juice you use; since I used orange juice mine mostly just tasted citrusy and not overwhelmingly like any of the flavors.  I didn’t taste any carrot or sweet potato at all.  I had one lump where I guess I hadn’t broken it up well enough before adding the juice, so it is important to make sure it’s broken up well before final shaking.  I occasionally got a bit of an almost powdery texture feeling in my mouth, which was a bit of a negative.  It was probably from either the dry milk or one of the stabilizers.

Overall it was a pretty good breakfast (though I did also end up making some toast as well since I wasn’t sure how long this smoothie would hold me over).  It was super easy and pretty yummy.    The list of ingredients is fairly legit, except for the “natural flavors” which could be almost anything.  Prices may vary a bit based on location, but I paid a little over $2.50 for mine which seemed reasonable enough.  It’d probably cost at least that much, probably more, just in ingredients alone for a pineapple, mango, carrot, sweet potato smoothie made from scratch.  Though I do wish the serving was bigger.  I think it’s a fair smoothie option for those mornings you’re running late and need to eat on the go.  Definitely a better option that stopping at a fast food place to pick up breakfast.

Should you buy Dole Smoothie Shakers?  Only if you need to eat on the run

← PCFG Is Off For A Week! Sorry For No Posts!
The Snack Report: Crunchie Bar →