Here at Poor Couple’s Food Guide, we strive to bring you at least one Pizza Lab per month. Most of the time we’re pretty good at it, but there’ve been instances where we came close to missing that timetable. Some of you might be wondering, “What about February? It’s the last day of the month…”And for sure dudes and dudettes, you are right. But we’ll be damned if we broke our promise to deliver a new wacky pizza in time, and so on this magical day, February 29th, also known as Leap Day, we would like to direct your attention to the following: Chicken Katsu Pizza. 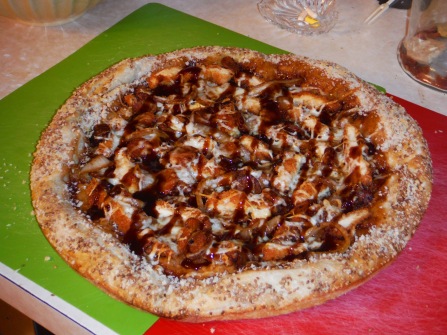 So all of you whom are acquainted with Japanese food may recognize katsu, but some other readers may be confused. To put it pretty simple, chicken katsu is Japanese chicken cutlets. That’s all. Nothing fancy. Just plain ol’ chicken fillets floured, egged, and breaded in panko (a thick type of breadcrumbs), and then fried. I shouldn’t sell them short though, katsu are awesome, and actually transcend your generic variety of chicken cutlets or schnitzel. Panko, as mentioned, is incredibly coarse as far as breadcrumbs go. And yet it’s also really light. As paradoxical as it sounds, these gigantic, airy breadcrumbs make katsu insanely crispy and crunchy and delicious. You can do the same with pork cutlets as well, which are known as ‘tonkatsu’. Traditionally the dish is served with a special type of sweet, worcestershire sauce simply called katsu sauce, and sometimes you see it served alongside kare-raisu (Japanese curry). Now that we have that established, let’s get back to the important topic, pizza. 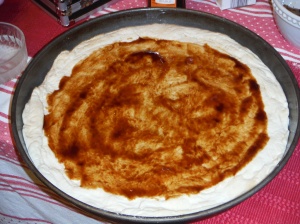 Interestingly, we originally thought about making this pizza a curry pizza, but figured that might end up too heavy. We opted instead for just the katsu itself, realizing it as a sort of Japanese version of very first Pizza Lab, our Chicken Fingers Pizza. As mentioned, the breaded cutlets are usually eaten with katsu sauce. We spread a layer of this sweet, fruity, yet savory dressing onto the dough. As an added touch we sprinkled toasted sesame seeds and panko breadcrumbs onto the outer crust to give it some extra crunch and flavor. 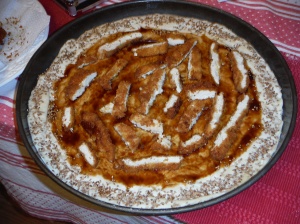 Next up came the actual katsu pieces. After frying them up, we sliced them into strips and added them directly on top of the sauce layer, so the two flavors could mingle and get to know each other and all that other cutesy metaphorical shit people say about food combining with each other. Typically we like to add vegetables onto our pizzas when we can, alongside the meats, to ensure they’re nice and varied in nutrition. This presented an interesting dilemma however, since chicken katsu usually get served as either a snack or an appetizer, or at most served with just rice and curry.

Even though katsu usually doesn’t get served with veggies, the curry it goes with does. We selected onions and carrots, both staples of Japanese curry, and seasoned them with a little bit of curry spices to lend them some of that flavor. This pie didn’t necessarily have to taste like kare-raisu, but we figured it’d give the vegetables a little leverage to stand on their own legs instead of just being there for the sake of having a vegetable. 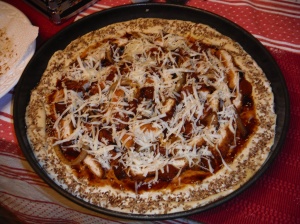 Last but not least, we opted for the old standby of mozzarella. Whenever we make Asian-themed pizzas we usually have a discussion on what type of cheese to use. Cheese was never really popular in Asian countries, especially Japan, where people actually tend to really dislike cheese on average, thinking that it’s just a gross, stinky block of dairy that doesn’t have many applications in cooking, instead faring more as an exotic, foreign thing from outside culture. It’s kind of how many Americans and western countries revere sushi as this strange, exotic delicacy that many people think is really gross, but some people love. I know some cheese can be kind of strong, but I do have to point out the irony that cheese is disliked due to its odor, by many native Japanese whom consume slimy-ass fermented soybeans known as natto, a dish that is considered notoriously smelly even by the people whom eat it. But hey, different strokes, ya know? 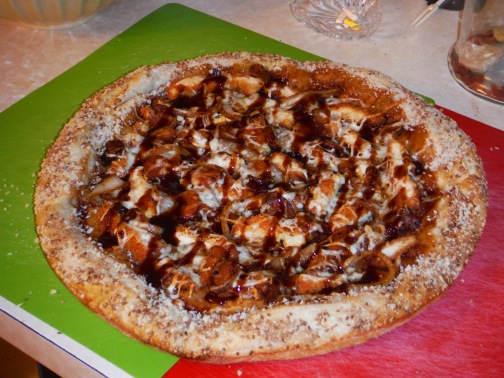 The pizza ended up turning out great, considering how many things were up in the air at the beginning of its conception. The crust especially was friggin’ amazing. The combination of toasted sesame seeds and panko breadcrumbs gave it this really intense crunch and great flavor. We always love when pizzas have such good crusts, that getting to the outer crust is not a disappointing experience but rather just a yummy, different one. While the chicken katsu itself doesn’t have a ton of flavor on its own, combining with the sauce and the curry-flavored vegetables really gave it a unique taste. If you’ve had katsu before, well, it tasted pretty similar to that, only better. I originally described it as sort of like a Japanese version of chicken fingers on a pizza, and that’s pretty accurate, so… 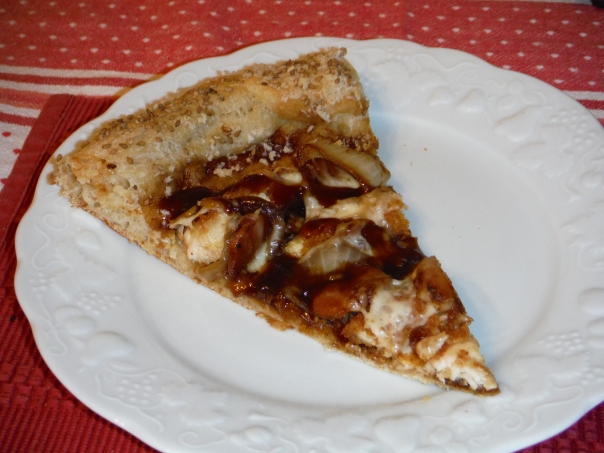