We covered some of the history of spiced Christmas cider, known as wassail, in Part 1 of this article. Read up if you missed it, or read on for our recipe!

As some of you may know, PCFG will be providing free wassail at the Patchogue Village Wassailing Crawl this Saturday! If you live on Long Island and will be in the area, stop by and partake in some merriment as Long Island History and Pub continues a Christmas tradition that’s all but lost in the U.S. in modern times. You may learn a thing or two, and at very least it’ll help get into the Christmas spirit despite the surprisingly mild (and pleasant) season we’ve been having so far!

If you can’t make it, well there’s always the option of making it at home. Bear in mind, we will update this post at a later date with photos from the wassailing walk we’re attending on Saturday!

As mentioned in the first part of our post, wassail is spiced cider served around Christmastime. Sometimes it is referred to as “mulled” cider, due to the use of ‘mulling spices’ which don’t really have an exact definition. But they’re your classic baking/holiday spices like cinnamon, nutmeg, etc… I will point out however, wassail and mulled cider are NOT the same thing, something that’s become a little bit of an irrational pet peeve or mine over the years.

As you’ll see below, wassail is more than simply hot cider with some spices thrown into it. Mulled cider contains any number of the aforementioned ‘mulling spices’ and may or may not be served hot. Wassail meanwhile is similar to mulled cider in that it has many of the same spices, but it also contains other ingredients that make it more of a punch drink. On top of that, there’s an even more advanced version of wassail known as “lamb’s wool” which makes use of boiled, mashed apples, instead of cider, and is made frothy through the use of tempered, beaten eggs as well as copious amounts of beer. Personally, I prefer regular wassail since the idea of drinking spiced/spiked fruit juices sounds more appetizing than a mixture of apple goop, beer, and raw eggs. Maybe that’s just me though, who knows.

Obviously on PCFG, we try to preach open-endedness for recipes, and tell you to substitute whatever you want or need to fit your own preferences/diets. But this recipe especially takes that notion to the extreme since wassail as a concept is so old and thus has no real official recipe. I developed this recipe over years and years and years, after first trying some at a department store Christmas party when I was in high school. It’s a drink. You can add whatever the hell you want to it, so long as it tastes good. So go crazy and have fun!

The only real downside to making wassail is that it really doesn’t save well at all. Sure, you can save the remainder and it’ll be totally edible and drinkable. But once it gets cold and refrigerated, it will never be as good as it used to be. All the spices and fruit solids floating in the cider will settle and it just won’t have the same zing it does when it’s freshly made. Even if you heat it up, it’s just not the same. When you’re making it fresh, it smells amazing and basically instantly turns any atmosphere festive, through sheer scent-power.
Obviously, you can quite easily halve the recipe by using half a gallon of cider, and cutting all the measurements in half. Make a half-batch if you’re attending a smaller get-together. But if you’re headed to a fully-fledged, actual-ass Christmas party, make the proper gallon. Also in addition to being fairly easy to put together, it’s also not very expensive since aside from cider, it contains mostly ingredients you should have lying around. 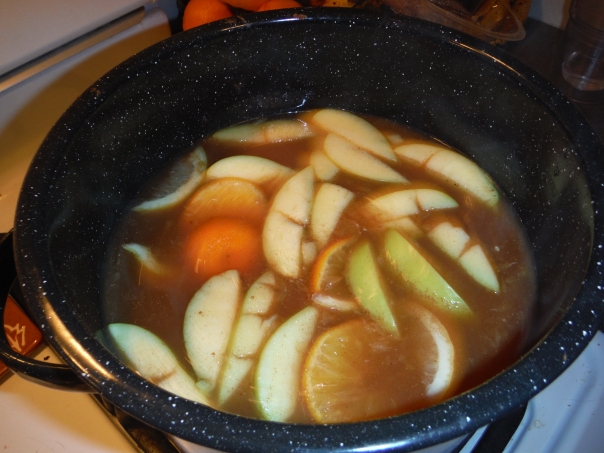 As pretentious as this sounds, I’ve guarded this recipe for years; I’ve kept it secret for all of my adult life, even to the point of friends and family getting annoyed at me for not sharing it over the past decade. So consider this a special occasion, an exclusive for Poor Couple’s Food Guide if you will. It’s an absolute treat which I guarantee almost everyone you know will enjoy. Seriously, this drink will become mythic in your circle. Everyone’s gonna want you to make it for them every single year.

Are you ready for that responsibility?