Oreo just keeps on crankin’ out new flavors and varieties. Earlier this year, we took a look at S’Mores Oreos, which were actually pretty awesome. On one hand, it’s getting kind of tiring seeing them shill out inane ideas like red velvet and key lime, but at the same time there is a tiny bit of excitement in seeing what crazy crossover they’ll do next. Their newest addition to the product family is a bit of an enigma, Oreo Thins. They’re essentially your regular old original Oreos, but half the thickness. That’s all there is to them, yet they’ve caused a little bit of a stir on social media and people I know for whatever reason. Apparently people are interested in them.

Admittedly, I don’t really know who the target audience for these cookies are. Meg offered the possibility that they’re for people dieting whom want to cut back on their snack intake, but I’m not entirely sure of that. Whereas three of the original Oreos will set you back 160 calories, you can have four of the thins for 140 calories. So, you get an extra cookie for roughly a similar caloric intake. It sort of balances out though considering they’re about half as thing as originals, so there’s not much in the way of a bargain here, if you’re cutting calories… Meanwhile, there are reduced fat Oreos which will give you 150 calories for three cookies, with less fat than both the Original and Thins.  The only advantage I see is if your dieting strategy is to eat smaller bites/pieces to fill your appetite faster.

So if they’re not particularly better for you, the only explanation I could offer is just for the novelty of thin cookies. Thin, crisp cookies are a thing that does already exist, and this is Oreo’s explanation to them. Some people do like their cookies to be on the light and crisp side, so for all seven of the people in the world who refuse to eat Oreos on the basis they’ve been too thick, this is their lucky day I guess.

That being said, I will give them credit, they are thin. Like, really, really freakin’ thin. 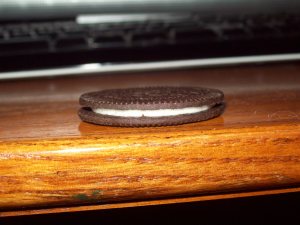 Basically like half the thickness of a standard Oreo, these Thins are definitely crisp and lighter than the original variety. They taste exactly the same. Like, not even slightly different. Not that I was expecting them to magically have some new flavor because they’re so squat, but I dunno. They just really don’t differentiate much from Originals, even being way flatter. This problem is compounded even more when you consider the slogan and main ad focus of Oreos, “Milk’s favorite cookie!” Okay, eating them plain, they definitely do have a much crisper texture. But dunk these bitches in milk and they instantly become regular Oreos for all intents and purposes. That crispness goes out the window almost instantly, and the texture is indistinguishable from a regular milked-up Oreo.

As far as craving/satiation/etc goes, I didn’t really notice much of a difference. After four or five I was satisfied, similar to a regular Oreo. So I guess I saved about 40 calories? That’s cool I guess, but when it comes to dieting, 40 calories isn’t much of a save, and for people who it really will matter to, I don’t think they’re eating Oreos in the first place. Just as with all snacks and desserts, eat them (ALL Oreos) in moderation and you should be okay. But beside all that, the Thins just don’t really do much to deserve to exist, as cruel as that sounds.

Should you buy Oreo Thins?