It’s that time of year again. It’s almost Halloween, which means it’s time for witches, ghosts, goblins, and jack o’lanterns!  Pumpkins and jack o’lanterns are some of the best Halloween decorations because they look nice and fun, but are also food!  That’s right, all that gloop you pull out of your pumpkin to carve it has a bonus snack hidden within.  Pumpkin seeds!  Pumpkin seeds are a good snack because they’re a good source of protein, fiber, vitamin E and vitamin B.  They also contain the good fats that can help lower cholesterol.  So you could definitely think twice before just throwing all those seeds out.  But before eating them you need to roast them. 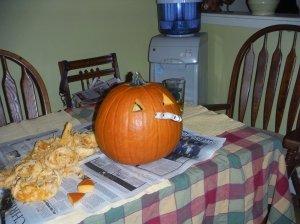 Augh! I didn’t know you were gonna kill it!

First you’re going to have to separate the seeds from the rest of the pumpkin guts. 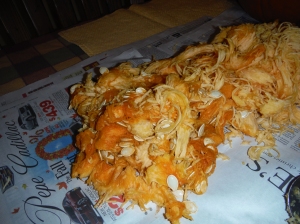 To do this put everything in a strainer, and run water over it.  This helps separate the seeds from the gloop.  Throw the gloop out, and leave the seeds in the strainer.  Once all the gloop is out just give the seeds a good rinse.  (There aren’t any pictures of this step because my hands were covered in pumpkin slime).

Next pour the seeds onto some paper towel and dry them off the best you can.

Line a baking sheet with foil and spray with non-stick spray. Place the seeds on the baking sheet, trying to make sure they’re only one layer.  Drizzle with olive oil and sprinkle with salt. 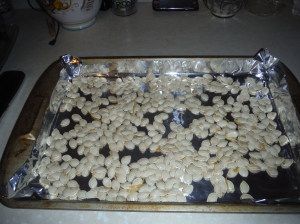 Place in the oven and bake 10-15 minutes. Check on them after 10 minutes and give them a bit of a shake/stir.  They should be starting to get lightly brown on the outside. 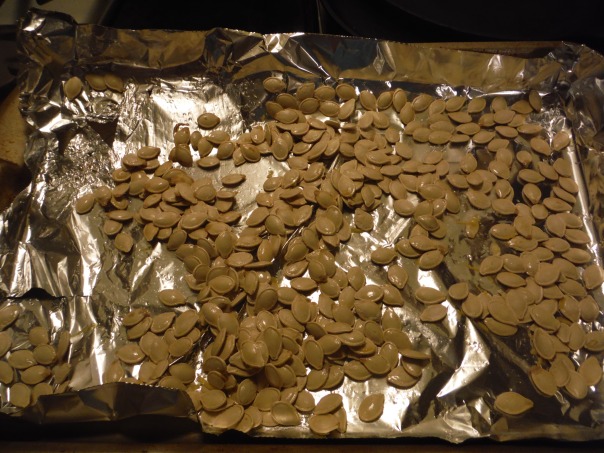 Your seeds should be a bit browner than this…unfortunately I accidentally deleted the totally finished picture before uploading. My bad.

Once done, let cool, and enjoy!  (For the record, the part of the seed you eat is on the inside, not the whole thing). You’ll have do a tiny bit of work to crack them open but it’s worth it. Pumpkin seeds have a nice slightly nutty, slightly pumpkin-y flavor.

Now you have an awesome jack o’lantern, and yummy, healthy snack. It’s a win-win! There’s tons of health benefits to eating pumpkin and its seeds. Check out this awesome chart from Positive Health Wellness that summarizes it really nicely, and if you enjoy, go check out some of their other articles!

Remember, not only are the seeds edible, but if you decide to not carve your pumpkins into jack-o-lanterns, you can still eat them later on after Fall is over, as opposed to just throwing them away. Pumpkins are super versatile, and super yummy. 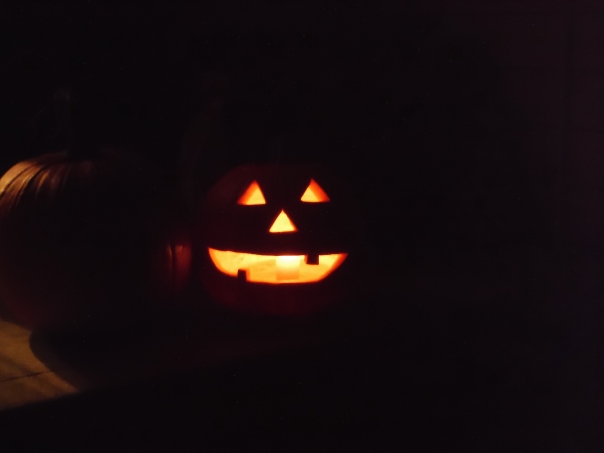