The Cereal Report: The Return of Fruity Yummy Mummy

So Halloween is less than a week away, and spirits are high, so to speak. I can’t say whether to take that literally or metaphorically since I feel it could be misconstrued that ghosts are smoking pot. That’s entirely possible, though I’m not sure whether they’d be potheads who smoked so much weed that they continued to do so in the afterlife, or if they’re just really stressed out ghosts who were recently hooked up, in which case they’re probably the most laid back, least effective ghouls in the history of monsters. Regardless, what I meant to say is that most people I know enjoy Halloween, and those who don’t will probably be brutally murdered on the night of, for not believing or something like that. As such, it’s high-time for another Monster Cereal review which I hope will find you in due time, since these cereals will be off shelves again soon. Admittedly I’m getting kiiinda sick of them personally since it’s been my breakfast nearly everyday since late September, but hey, ’tis the season. Let’s take a gander at the final lot of the group, Fruity Yummy Mummy. 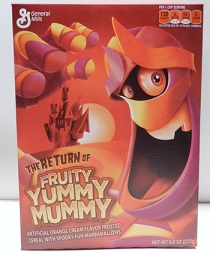 I didn’t write “The Return of Fruity Yummy Mummy” in the article title to be dramatic. That’s literally the official name of the cereal now.

As mentioned, General Mills inexplicably decided to bring back Yummy Mummy and Fruit Brute after a two-decade-long hiatus. This isn’t a bad thing, but it seems weird that it took them this long to reach that decision. Did someone at General Mills think Halloween got unpopular from 1985 to 2010? Was there some sort of long arduous debate about the relevance of mummies and werewolves in the Samhain season? Or do they simply just hate joy? No matter, the two cereals are back and they’re pretty good. 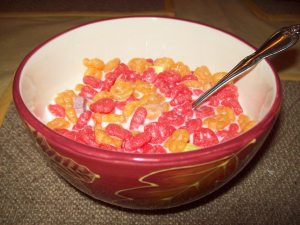 You may recognize this as the post from my Fruit Brute review. Well go figure, they’re the exact same cereal only with different flavors.

Yummy Mummy interestingly enough is artificially flavored to resemble orange cream, a rarity amongst not only cereals, but food in general. The flavor itself manifests itself on occasion in different food scenarios, all of which are delightful. There’s the classic orange creamsicle frozen bars we’ve come to love in the summer, but then I’ve also seen it represented in baked goods as “orange vanilla” flavor, and if you’re feeling ritzy, it’s even marketed as a flavor essence called “fiore di Sicilia”. Because no, Sicily doesn’t smell like cigarettes and garlicky body odor, but rather it smells like orange flowers and vanilla.

We are pleasant human beings!!

Potshots at Italian people aside (I’m allowed to, Meg and I both possess heavily Italian heritage), Iiiiii don’t really think they flavored Yummy Mummy with fiore di Sicilia, so much as they added a bunch of mashed up beetle shells and impossibly-named chemicals to make it taste that way. Whatever the case, it honest to God tastes like orange cream, which is pretty cool for a cereal. As mentioned, the cereal itself is the same exact as Fruit Brute, just with a different flavor, but I can’t really hold that against them, since I’m assuming making this cereal was some sort of a chore for their super-modern factories. Or at least I can only assume that based on the fact it’s taken them longer than I’ve been existing on this planet to bring these Halloween staples back.

The only criticism I offer to the cereal is that the specific box I purchased featured noticeably fewer marshmallows compared to its counterparts. Whether this is some sort of malfunction in their marshmallometer or they simply decided to give Yummy Mummy the short end of the stick, it was fairly annoying. And no this isn’t a matter of my inner child pouting that my breakfast wasn’t made exclusively of colored-sugar either. I ate Fruit Brute and Count Chocula before opening my box of Yummy Mummy; I had some base ground to compare it to, and it was definitely somewhat of a deal I couldn’t ignore. I will give them the benefit of the doubt though, since the rest of their cereals are chock full of Frankenstein heads and misshapen ghosts, so I’ll assume it was just the luck of the draw on my part.

Should you eat Fruity Yummy Mummy?

Posted on October 29, 2013, in The Snack Report and tagged blast from the past, cereal, Fall, forbidden fruit, Halloween, review, yummy. Bookmark the permalink. Leave a comment.