For as long as I can remember there’s always been this intense rivalry over Pop-Tarts VS Toaster Strudels. Pop-Tarts was the more “fun” toaster pastry, coming up with insane flavor varieties, like PB&J or hot-fudge sundae, that almost come close to Pizza Lab territory. Toaster Strudels meanwhile were the wholesome choice, containing actual fruit and being more of an actual breakfast food instead of a sugary-treat disguised as breakfast. Personally I never picked a side; I enjoyed both of them, though as a kid growing up, my mother never really bought Toaster Strudels for whatever reason. So you bet your ass that as an adult I buy them whenever I want! And while I still don’t hold any malice towards Pop-Tarts, I don’t eat them as often as I used to, usually only checking out new or limited edition flavors.

Like many other companies, Kellogg’s caught the limited-edition flavor fever, especially with Pop-Tarts. They used to stick to more “themed” varieties like gingerbread Pop-Tarts around Christmas, but this year they’ve gone all out. We’re seeing insane flavors like root beer float and maple bacon, and today’s review: watermelon. (They’ve also devised one of the most cringey ad campaigns on Earth, both on TV and on their boxes) 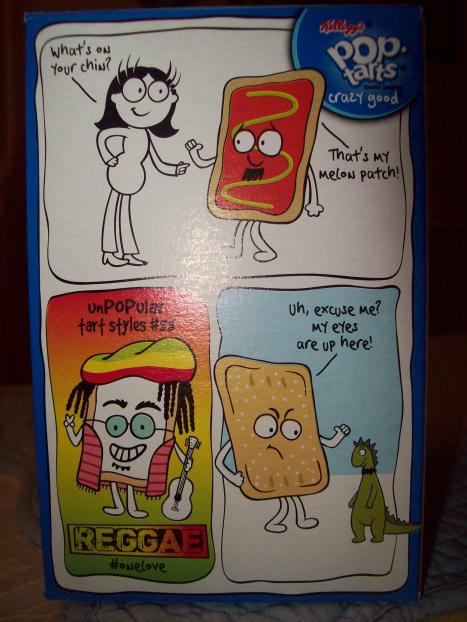 GET IT CUZ MELONS GROW IN A PATCH AND SOUL-PATCHES ONCE EXISTED OH HOH HOH HOH.

To me, watermelon is one of the most perfect foods you can eat. It’s cheap, tastes good, is healthy for you, and also can double as a drink if you’re thirsty. And man, can you say Summertime? There’s not many other foods that perfectly capture that Summer essence like watermelon does. That said, watermelon as a flavor, has never really “worked” in candy form, or other artificial variants. I mean, yeah, artificial flavoring is shitty, and rarely does its fruit namesakes’ justice, but for the most part you can still sorta get the basic gist of what it’s trying to emulate. Watermelon meanwhile, sucks in candy form. I don’t know who’s responsible for it, but there’s this gross formulation they used for imitation “watermelon” flavor in candies and other artificial stuff and it’s been the same for as long as I’ve been alive. Instead of the subtle, fruity sweetness you get from real melon, candies like Jolly Rancher instead hands you this vulgar, over-the-top, super tart horse shit that doesn’t resemble watermelon at all. Why do I bring this up? 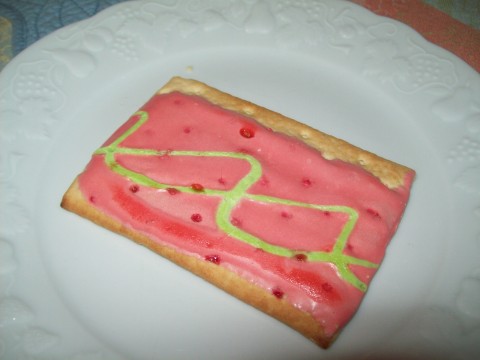 Watermelon Pop-Tarts straight up, 100% taste like a frigging Jolly Rancher. Like, not just in passing. I mean, when you bite into this, it tastes like a mouthful of hot, fruity, Jolly Ranchers (which incidentally is one of the dirtier-sounding things I’ve written in a Snack Report lately). It’s intensely sweet, with all the watermelon-flavor of a bottle of corn syrup. Is it actively bad-tasting? No, I won’t say that. It’s not outright offensive, but at the same time it represents the Flanderization of Pop-Tarts as this sickeningly sweet candy-breakfast. (And in this case, it’s almost literal.)

So no, these Pop-Tarts aren’t really awful, there’s much worse things to eat. But they’re just not even close to good. They’re mediocre at best. The outside frosting design is whimsical and all, with its watermelon-inspired design, but that’s really the most positive thing I can say about them. They’re insanely sweet Pop-Tarts that effectively taste like hot-melted Jolly Rancher candies. In my opinion, unless you have a boat-sized sweet tooth, these aren’t worth the money.

Should you eat Watermelon Pop-Tarts?

Posted on June 28, 2016, in The Snack Report and tagged breakfast, disappointing, review, suh-weet!. Bookmark the permalink. Leave a comment.