I feel like I start a lot of my Snack Reports with, “I was in the grocery store and saw this on sale.”  But that’s really how I end up finding most of the stuff I review.  Some foodstuffs I hear about in advance and seek out to review, but a lot I find while just wandering around the grocery store, and if it’s on sale, I’m game for giving it a try.  So…I was in the grocery store the other day and saw these blueberry English muffins on sale.  Actually I saw a different Thomas’ product on sale first, but it’s going to be on sale for longer than these are, so I ended up getting them first.   I had tried the limited edition apple pie English muffins a few months ago and enjoyed them, so I figured blueberry English muffins were worth a shot as well; I like both blueberries and English muffins. 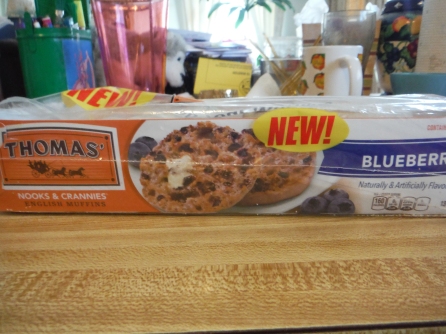 To be honest, I was a bit concerned by the smell.  There was a very strong blueberry aroma emanating from the bag; stronger than any package of just straight blueberries I’ve ever had.  I could smell it halfway across the kitchen before the package was even opened.  This made me worry that they were going to be overpoweringly blueberry-y or really artificial tasting.  Luckily my fears were unfounded.  The smell faded the more the package was opened and closed and there were no overpowering flavors.

You do get the normal 6 per package, but 2 had been eaten before I was able to get a picture.  Also I’m not sure why one is upside down.

Some muffins had more blueberries than others, but all had an acceptable amount.  There weren’t any vast blueberry discrepancies.  The blueberries didn’t get in the way of any of the standard English muffin nook and crannies.  The inside seemed slightly denser than regular English muffins, probably from added moisture from the blueberries, but it wasn’t that big of a deal; it didn’t make any difference to the eating experience.

Overall I enjoyed these blueberry English muffins.  The blueberry flavor wasn’t overpowering but it was definitely noticeable.  The first one I ate toasted with just butter and it was yummy.

The second one I decided to try adding peanut butter, since in the summer I enjoy eating peanut butter toast with blueberries.  To their credit, the blueberry flavor still came through even with peanut butter on top.  They would probably also be yummy with some cream cheese on top, but I didn’t try that, mainly because I just thought of it now while writing this.  If you want to really enjoy the blueberry flavor just regular butter is the way to go though.

The package says “new” and not “limited edition” so I imagine that means they’ll be around for a little while at least, assuming they sell well.  You probably don’t need to rush out and find them before they leave shelves, but with the way things come and go from stores these days you might not want to wait too long either, if you want to try them.

Posted on May 6, 2016, in The Snack Report and tagged blueberry, breakfast, It's a winning combination, review, snacks, yummy. Bookmark the permalink. Leave a comment.