← Poor Couple’s Food Guide is Now on Youtube!
Cheat Codes: Make Your Own Bruschetta in Minutes →

There’s an interesting dynamic when it comes to ramen in the United States.  On the one hand there’s the packaged ramen you can buy at any grocery store for like, 25 cents and that’s been stereotyped as a poor college kid food staple.  On the other hand you have ramen houses/restaurants where you can get more authentic ramen dishes, but they tend to range from a bit pricey to way too expensive.  I’m not entirely sure what it means, I’m just interested by the fact that there isn’t much of an in between.

That is, of course, unless you make your own in between.  This post will look at some ways you can upgrade your cheap grocery store ramen to something a bit more personalized.  Ramen comes with its own flavor packets, which are tasty, but a lot of times people don’t want to use them because of the massive amounts of sodium in them.  Here at PCFG if we’re using the flavor packet we usually only use about half of it, and it’s fine.  But here’s some ways to give flavor to your ramen without using the flavor packet at all.

The traditional way to make ramen is to eat it as a soup.  However you can also drain the noodles after cooking and eat them just as noodles.  Tips for seasoning will work for either way.  Pictures for this post will show how to prepare the ramen as just noodles (partly because I really like noodles, and partly because it was too warm out this week for me to want to eat soup).

If you’re eating the ramen as a soup then obviously you’ll want the liquid to be nice and flavorful.  Cooking the noodles in your favorite broth is the best way to do this.  If you’re going to be draining the liquid away though you might not want to waste the broth, so another way to get flavor in is to add some soy sauce to the water. 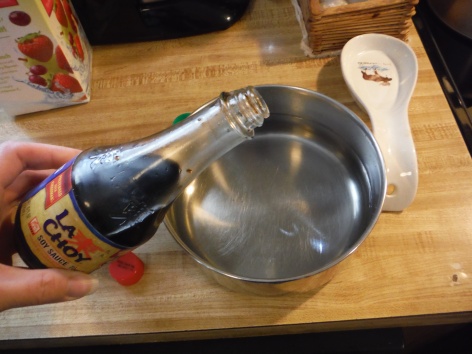 The main way you can add flavor is with spices.  This is also the most customizable.  Some suggestions:  chili powder, cumin, garlic powder, red pepper flakes, black pepper, cayenne pepper, ginger.

You can also add some fresh or dried herbs. 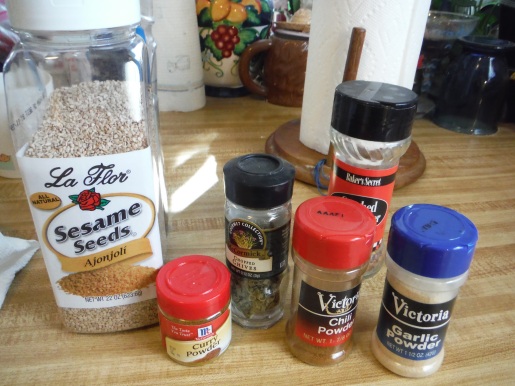 Assortment of bottles pulled out of the cupboard for this picture.

If you’re going to make your ramen as a soup, add the seasoning while the ramen cooks.  If you’re going to eat it just as noodles, wait until after you drain them.  Adding a pat of butter will help the spices stick to your noodles. Then add your spices and make sure they get evenly distributed.

Before mixing.  For this ramen I used: garlic powder, curry powder, chili powder and chives.

IMPORTANT:  if you’re not using the flavor packet, you’re going to have to add salt, especially if you’re preparing your ramen as just noodles.  The flavor packets may have way too much sodium, but you still need some salt to keep your ramen from tasting bland.

A final way to add some flavor is through oils.  Drizzling some flavorful oil, such as sesame, garlic, or even chili, as a finishing touch on your ramen will boost things to the next level.

These are just some ways to upgrade your “college kid” ramen.  And it’ll be a lot better for you than using the flavor packet.  It’s also a great way to make your ramen vegetarian if desired. 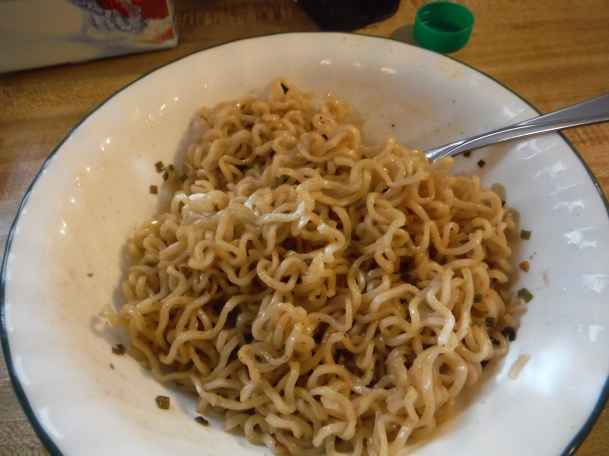 Posted on March 11, 2016, in Cheat Codes and tagged Asian, easy, knowledge is power, On the cheap, spices, vegetarian, yummy. Bookmark the permalink. Leave a comment.

← Poor Couple’s Food Guide is Now on Youtube!
Cheat Codes: Make Your Own Bruschetta in Minutes →