Well, Oreo is at it again. It seems like every week there’s a new limited edition Oreo flavor out in stores. Due to how often they’ve been releasing new flavors we’ve fallen behind in reviewing them all. Oreos are kind of pricey and we can’t afford to buy new ones constantly. But we were both intrigued by the idea of cinnamon bun Oreos so we gave these ones a try. The idea of recreating a cinnamon bun in cookie form isn’t an inherently bad one. Cinnamon buns are amazing and wonderful, but they’re a pain in the ass to make yourself at home (from scratch anyway) and getting them fresh usually involves a trip to the mall. So a cinnamon bun treat that’s easily accessible should be a big hit. The difficulty comes in capturing what makes cinnamon buns so delicious in a non-bun form. How did Oreo do at accomplishing this? Let’s assess. 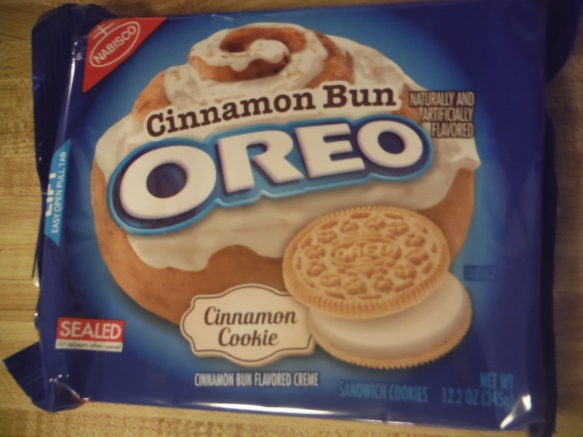 For the cinnamon bun Oreos they introduced a (vanilla) cinnamon flavored cookie with a cream cheese frosting filling. I believe the filling is the same one they used for the red velvet Oreos, and the fact they’ve also re-released that edition at the same time as these pretty much confirms that notion. If you enjoyed the filling in the red velvet Oreos like we did, you’ll enjoy the filling in these. As far as I know the cinnamon cookie is new though. I enjoy the cinnamon cookie and find it rather tasty. If they decided to sell just the wafers on their own with no filling I’d probably buy them. 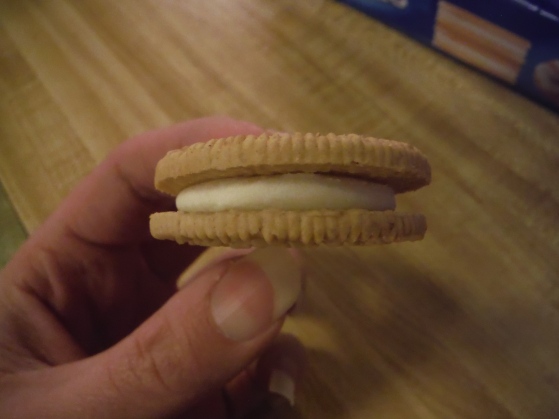 Conclusion: these are yummy cookies, they really are. And if you’re feeling nostalgic for Dunk-A-Roos they may help satisfy that craving. But they don’t satisfy a cinnamon bun craving. And like all limited edition Oreos they come in a smaller pack for the same price, which is a point against them. If you can get them on sale they’re a nice treat, but don’t feel like you need to go out of your way to try them.

Should you buy Cinnamon Bun Oreos? Yes, but preferably on sale.