Cheat Codes: How To Substitute Buttermilk Using Vinegar and Milk

Buttermilk is a weird concept. It’s milk that’s cultured with bacteria to curdle it slightly, making it kinda gross and blorpy, but actually good for you and better for certain types of cooking. It originally was made from the leftover milk when butter was churned, letting bacteria build up to acidify the milk and thus curdle it. In plainest terms, it’s really just a controlled version of spoiled milk. Obviously it’s not the same as leaving milk in the fridge for a month and having it taste like hot-ass and sponge, but both the old-fashioned butter churning way, and modern day cultured way result in milk that’s been curdle due to high amounts of bacteria in it.

But actually, I should stop kidding around, buttermilk actually plays a really big role in foods like cake and waffles. It transforms pancakes from good to legendary. It’s ironically become somewhat of a luxury item today, despite the fact it’s not very dissimilar to yogurt. If you can find it at your local grocer and don’t mind shilling out the extra money for it, go for it! But if not, there’s a way to simulate it at home pretty easily.

Transforming regular whole milk into a quickie-version of buttermilk is pretty easy, considering the chemical nature of it. Real buttermilk gets curdled through the action of acidic bacteria. Acid separates the two building blocks of milk curds from the whey, and in buttermilk it separates them a little bit less than other means. If you used a stronger acid like citric acid, you’d end up with straight curds and whey, which you could then use to make fresh ricotta! But we’re not here for that. All it takes at home is a little bit of vinegar. 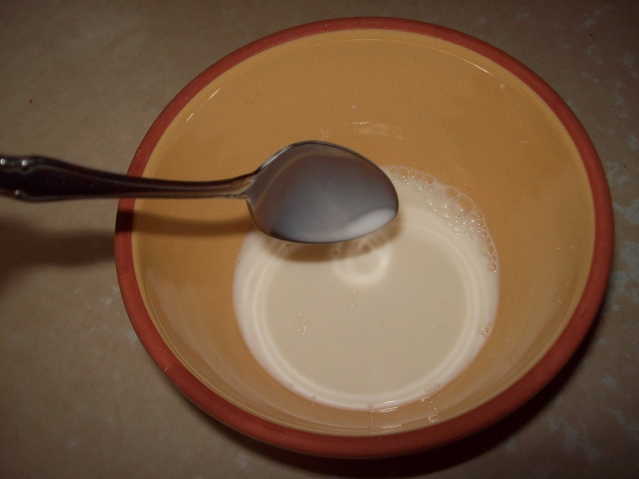 I use the term ‘approximately’ because it doesn’t need to be exact. If you put a tablespoon of vinegar into 1/2 cup of milk, it’d be a little thicker and chunkier, but it’d still be close enough to buttermilk to work. As far as steps go, there’s really not much to say…

So yeah, as you can see it’s kinda gross. But fortunately I don’t know of any recipes that just call for you to be eating raw buttermilk without it getting added to some other mixture. As mentioned, it goes great in pancakes and waffles, and can be added to certain baked cakes to make them tangier/fluffier. Another common use for it is to use it in batters for fried chicken/chicken fingers, or other fried foods.

Lastly of note, obviously if you make it at home like this with vinegar, it will lack the probiotic health benefits you get from ingesting the real bacteria cultures in authentic buttermilk. Unfortunate, but convenience usually comes at some price. You can go eat some yogurt or kimchi to make up for it.