A couple weeks ago we covered making pulled/shredded chicken from scratch. It’s fairly easy, and it makes for awesome yummy recipes. But what if there were a way to make it even easier? What if, say, you wanted to just… buy chicken and shred it in like two minutes flat?

One of the odder luxuries to pop up in supermarkets over the past two decades has been full rotisserie systems right on the premises. I say odd in the sense that it’s actually surprisingly nice and convenient, and you’re really not sacrificing quality in doing so. While pretty much all wholesale organizations like Costco and Sam’s Club have been doing so for as long as I can remember, it’s a fairly new thing seeing every new supermarket have one of these setups now, offering full roast chickens at like $5 bucks a pop. They’re fresh and cooked right there, so hey that’s pretty nice.

Moving on to shredded chicken since this is starting to sound like a commercial, I bring this up because rotisserie chicken is one of the slow-cooked methods I mentioned in the shredded meat article. To quickly review, slow-cooking tends to make meat incredibly tender and moist, which is perfect for making pulled chicken or pulled pork. The only down side of that is that invariably, the concept of it being ‘slow’ is kind of at odds with being convenient. No matter what, you need to do some planning ahead if you intend to make some pork roast in a slow cooker pot, or roast your chicken in that manner.

As you can see here, we’ve got some shredded chicken. That’s good. But believe it or not, that pile took pretty much like 10 seconds to create. And it was only like a fifth of what came off the entire chicken. So now you see where I’m going with this.

I’m really no exaggerating here. Between the breasts, legs, and thighs you’re getting enough meat to feed an entire family, and it really takes less than 10 minutes to do the entire bird. Each rotisserie chicken will probably yield about 3-4 cups of shredded meat. That’s a lotttt of tacos you can make with that. 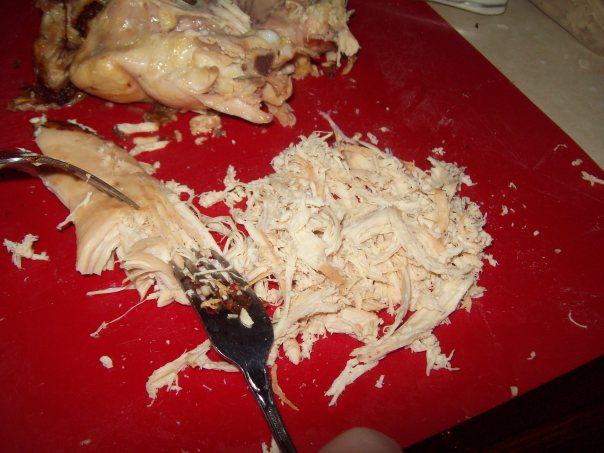 Once you cook it in a sauce or spice blend, it’s pretty much ready to go in burritos, sandwiches, tacos, on a pizza, as a side dish, or just eaten on its own. For example, see our savory pumpkin pizza from last year which featured a delicious maple-glazed pulled chicken. It’s really easy, really fast, and really versatile. Try it out sometime.

Posted on February 17, 2015, in Cheat Codes and tagged chicken, easy, On the cheap. Bookmark the permalink. Leave a comment.