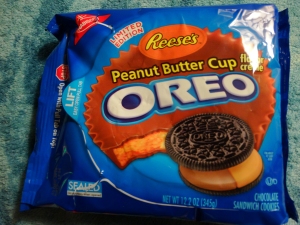 So you may or may not be aware that peanut butter Oreos have existed already. They’ve been around for a while, and they’re pretty good. They have a decent peanut butter / chocolate flavor going on. Yet something was always missing, I could never put my finger on it. They were good, but never great. Reese’s Oreos meanwhile completely change that up. Reese’s Peanut Butter Oreos are incredible, and by far one of the best store-bought cookies I’ve ever eaten. 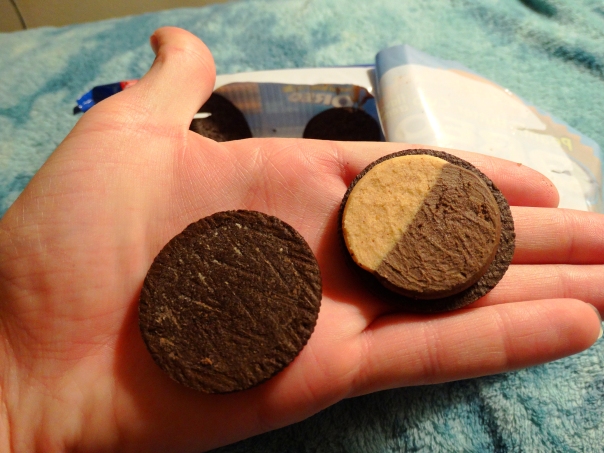 Interestingly enough, one big, big difference in regular peanut butter Oreos and Reese’s Oreos is that the latter ironically has less peanut butter cream in the middle, sporting a half-PB and half-chocolate-cream filling. It sounds like this would tip the scales a little bit too in favor of the chocolate flavors, considering the cookies are chocolate as well, but I assure you that’s not the case.

I think what peanut butter Oreos originally were missing was the salty, nutty goodness that real peanut butter actually has. It was easy to tell it was just made with peanut flavoring and tons of sugar and random filler ingredients to produce a cream that imitated the taste. I feel like this one has a stronger peanut butter taste, and probably a different cream formula, which would make sense since it’s licensed with the Reese’s Peanut Butter name on the package. Reese’s throws their brand around, but they never phone it in. Not that the package includes explicit peanut butter as an ingredient, there’s definitely something different going on ingredient-wise. Why the hell else would Reese’s plug their name on the package? They’re not desperate. 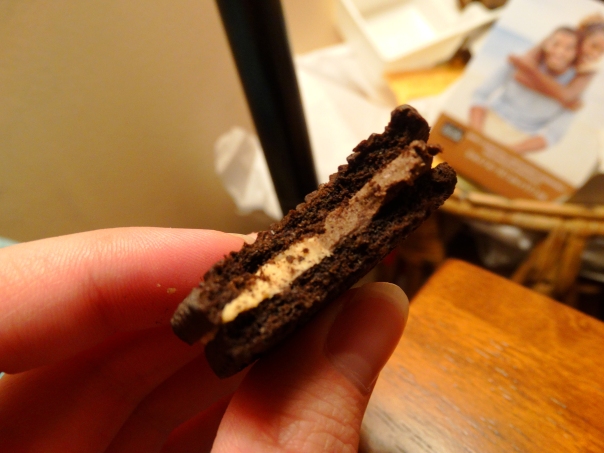 Either way, I’m starting to ramble. The dynamic of the Reese’s Peanut Butter cream and the chocolate cream filling goes great together, and actually as cheesy as it sounds, it tastes exactly like you’re eating a Reese’s Peanut Butter Cup, only inside of an Oreo cookie. Personally I’m an Oreo-dipper with milk, but these were so good I was fine eating them plain. That being said, they are absolutely delightful in milk, since peanut butter and milk are a miracle combination that you rarely get to experience. These cookies are incredible, but sadly they’re limited edition. Be sure to buy some ASAP, they’re worth anyone’s attention, who isn’t allergic to nuts, though even if you are, they’re debatably worth the ensuing anaphylaxis.