When I saw that M&Ms had a limited edition flavor that was out for Easter, I figured what better to post this week than a review of them?  For some reason this flavor is exclusive to Target, which actually has apparently happened before but I’m just now finding out about.  In doing some digging it seems that M&Ms has released a few different seasonal flavors to Target in the past.  I am now kind of upset that I missed out on some potentially awesome limited edition M&Ms.  But I found out about these ones!  And since we happened to be driving past a Target the other day, I managed to obtain a package.  They’re definitely being marketed as a spring/Easter candy since the green M&M is wearing bunny ears (unless it’s all some sort of elaborate Playboy ad, but I doubt it).  Other than the pastel colors I’m not entirely sure why they chose to make this flavor for Easter.  Strawberry shortcake is much more of an early summer dessert, when strawberries are in season than it is a spring one.  Seasonally appropriate nitpicking aside, let’s find out how these M&Ms taste.

The first positive sign is that they’re actually white chocolate.

A lot of things claiming to be white chocolate don’t contain any cocoa solids (aka cocoa butter) which makes them just white chocolate flavored.  So good on M&Ms for using real white chocolate; a lot of places take the cheap way out.  There are artificial flavors and dyes and whatnot, but that’s not terribly surprising.  M&Ms are never going to be health food; I’m content with them just using real chocolate.

When you first open the bag you get hit with a strong artificial strawberry flavor.  Like scratching the best scratch and sniff sticker ever.  The M&Ms themselves are a bit larger than regular M&Ms.  They’re kind of in between regular and peanut M&Ms in size.  The colors included are white, pink, and a kind of beige.  Presumably they chose the colors to resemble the colors of strawberry shortcake. 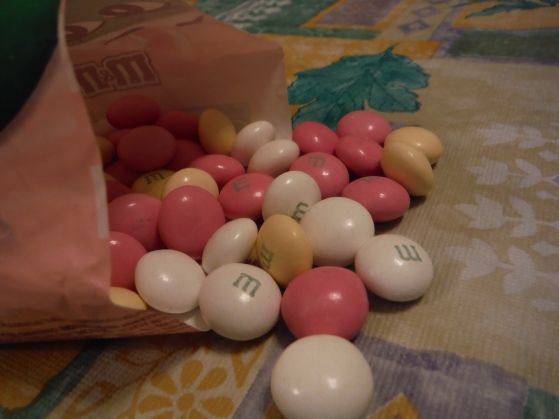 So they kind of look like strawberry shortcake, but do they taste like it?  Well…kind of.  There’s definitely a strawberries and cream flavor there, which admittedly is a huge part of strawberry shortcake.  But without the shortcake itself there’s nothing to balance the sweetness of the strawberries and cream flavor.  What you ultimately end up with is a super sweet artificial strawberry M&M.  It’s not bad really; it’s just very, very sweet.  I could only eat a few before the sweetness became too much; unlike regular or peanut M&Ms that I can easily eat a whole fun pack of in one sitting. 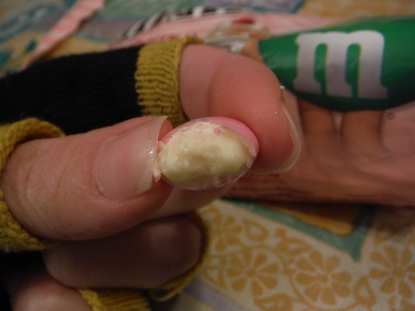 Overall I would say they’re a good addition to an Easter basket where you can just pick through and snack on one every now and then.  But I wouldn’t get them as just a candy on their own unless you have a super sweet tooth.

Should you put white strawberry shortcake M&Ms in your Easter basket?  Yes.