There’s a bit of a tradition here at Poor Couple’s Food Guide where, the week after Easter we go to the local drug store and buy a massive amount of the Russell Stover eggs for super cheap on clearance.  We usually eat about 4 and then have the rest in a bag for most of the year.  You’d think we’d have learned our lesson by now, but it hasn’t happened yet.  This year however, a flavor jumped out at me and I couldn’t wait until after Easter to try it – key lime.  The package caught my attention because I am a large fan of lime flavored things.  I’ve lamented before the fact that green apple has been taking over lime as the go-to green flavor, so anytime I see something that’s still lime, I’m game.

I was a bit hesitant because while I know that chocolate and orange is a common combination, it is not one of my favorites, so I was a bit worried that the lime/chocolate combo would be a turn off.  But I tried to go in with an open mind.  Upon opening the package I was a little disappointed because my egg had oozed a bit, making the bottom very sticky. 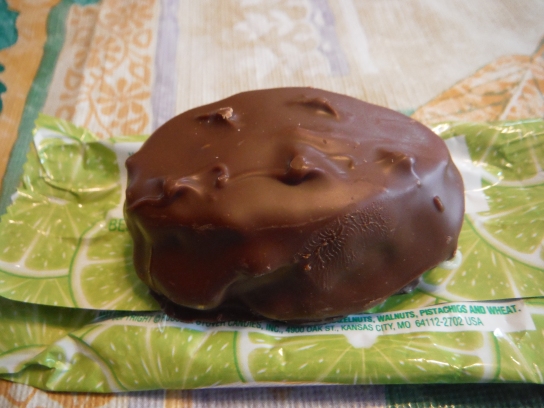 I took a bite and was surprised by how light and airy the inside was.  I know they called it a “key lime whip egg” but I was still expecting it to be a bit denser.  I was also surprised by how green it was.  I’m sure that was thanks to the artificial coloring.  So how did it taste?  The chocolate was standard Russell Stover milk chocolate.  It was yummy, and probably one of the better quality major brand American-made milk chocolates.  The filling was nice and limey; it was a fairly accurate key lime pie flavor.  I was worried about not liking the combination of lime and chocolate but that ended up not even really being much of a problem.  The filling melted almost immediately upon entering my mouth which then left just the chocolate to finish.  There wasn’t even all that much interaction between the two flavors.  But when I did taste the two together it was okay.  It wasn’t my favorite combination, but it wasn’t bad. 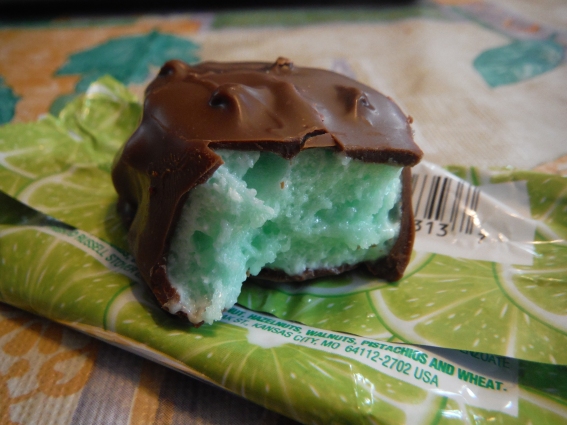 Really I just wanted more of the key lime filling.  It was really yummy.  If they made just a key lime creamy-gummy kind of candy I think it’d be really good.  Overall I’d say it’s not a bad combination, but it’s also not really a combination that needed to happen.  Neither the chocolate nor the filling is really enhanced by the presence of the other one.

If it happens to appear in your Easter basket, give it a try!  But don’t feel like you missed out if it’s not.

Should you buy Russell Stover Key Lime Whip Egg?  Only on clearance after Easter

Posted on March 18, 2016, in The Snack Report and tagged CHOCOLAAAATE, dessert, Easter, lime, On the cheap, review, snacks, yummy. Bookmark the permalink. Leave a comment.