Cocoa Puffs is one of those cereals that we sort of take for granted, since it’s been around forever. Originally created by General Mills in the 1950s, it’s been around for over half a century. Probably everyone has had a bowl or two in their lives. It’s nothing fancy, just chocolate-flavored corn puffs. Interestingly enough, there really hasn’t been much evolution or many special editions of Cocoa Puffs, for at least the time I’ve been alive. But lo and behold, General Mills put out a new, limited edition (I think?) version of the cereal for the first time in a long time, called Cocoa Puffs With Stars. I say “I think” because it doesn’t really explicitly state it. It just sorta claims they’ll be orbiting Earth for a short time, or something, on the box. 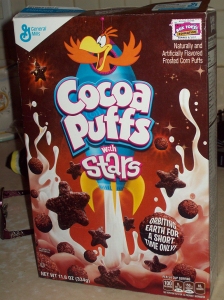 Okay, so let me throw this out there right at the beginning: Cocoa Puffs With Stars is literally what it says. It’s just Cocoa Puffs, with some star-shaped pieces in it. That’s it. No marshmallows, no new flavors, no gimmicks, it’s just a different shape. So… yeah. As far as limited runs go, this one kinda sucks. An additional shape is underwhelming, but even then, it can be a fun little changeup when the whole box is made up of those shapes. Unfortunately for CPWS, the puffs to star ratio is kinda one-sided, with the majority of the box still being the classic sphere shape. I guess they really weren’t shitting us when they said it’s just Cocoa Puffs With Stars. It’s predominantly Cocoa Puffs, but with some stars. So… yeah, that’s kinda lame.

That’s not to say it’s a bad cereal. Cocoa Puffs With Stars is really just a box of plain, old Cocoa Puffs, and as such it still has all its positive qualities. For one, it produces a great cereal milk. Every bowl results in a nice bonus of a helping of chocolate milk at the end. Additionally, as far as kid-cereals go, Cocoa Puffs is pretty innocuous. Featuring less sugar than many of its peers, plus real cocoa powder, it’s pretty decent for you and only features one or two sketchy ingredients. 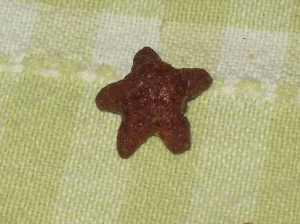 (Interestingly enough, while researching the history of Cocoa Puffs I found out they’re actually the same formulation and recipe as Kix, only with the chocolate added in for flavor. Talk about efficiency!)

As far as recommendations go, I don’t know, I don’t really see any reason to suggest this over a plain box of Cocoa Puffs. The ‘With Stars’ version adds nothing but a handful of pieces in a new shape. And hat’s being generous considering a lot of the stars were kind of misshapen and disturbing. Don’t lose any sleep over it being limited edition. If you can find it for a cheaper price than regular Cocoa Puffs, I guess give it a try? Otherwise, just get a regular box which will likely cost less. 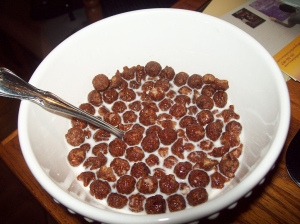 Also, can anyone explain to me why stoners love Cocoa Puffs so much? There’s other chocolate cereals out there…

Should you eat Cocoa Puffs With Stars?

(Unless you’re a Cocoa Puffs aficionado or something)

Posted on May 14, 2015, in The Snack Report and tagged breakfast, cereal, CHOCOLAAAATE, disappointing, review. Bookmark the permalink. Leave a comment.